There Must Be Something in the Air!

- March 21, 2013
What a weird day. We awoke quite early to say that neither of us had slept very well last night. I actually also woke up in a really good mood as it looked really bright and sunny out, but that was soon to change with the idiots around today...

Not long after getting up I noticed a fisherman who was setting up shop for the day. He literally sat right next to the back deck despite the rest of the towpath moorings being empty behind us. All of his poles etc resting on the back deck. I've noticed fisherman doing this near other boats before?! Why???

He was firstly told to get his poles off the effin deck, to which he obliged and then followed by kindly telling me a story that I couldnt have given a fuck about, of how there's sometimes another boat that lets him put all his stuff on and let's him sit behind the boat for a bit of shelter "like". Ugh!

We shifted him along as we had to go to top up with water as well and then return to the same place for Rob coming back only facing the other way. Which would have meant he would be then sat outside the front doors. Trying to take the boat into mooring with all his kit there would have ripped his fishing line and basket right out of his hands if it had got caught so we told him we needed him MOVED!! Idiot! Im sure he was planning on sitting his coffee cup on the deck too! Maybe I should have got him a coaster?

We then had another stupid individual for the day, who decided to move his 70ft rot box of a boat (wooden), backwards, with no engine and using a pole, running from the front to the back to try and keep it straight. That all sounds OK though doesn't it???

Only, by this time (lunch) the wind had picked up to around 30MPH so the old fool didn't stand a chance resulting in a collision with every boat he passed further up. However, still intent on moving the shit heap, he continued heading backwards towards our boat.

My mouth was about to let rip which was only stopped by Pawel saying he was going outside to stand on the gunnels of our boat to get ready to kick it off to stop it hitting us. By this point, it had gathered a bit of pace so if it did hit us, it would have done a bit of damage and probably took off some of the new tiles off in the bathroom! There was no apology as he was going past only weird mumbling noises...

Then.... Another boat hit the side of us this afternoon when they came into moor in front of us, moored up, and then decided against it for some reason. This resulted in them untying all the ropes, restarting their engine and for some random reason putting the engine into full speed to start cruising when they weren't a safe distance away from our boat. Only did they slow down when they saw me open the front doors ( clearly thinking it doesnt matter if they hit another boat if there's no one on it)

So they cracked into our boat 2 or 3 times, my front doors were already open to call them a f****in w*nker and kick their boat away from mine. I'd literally had enough. What made it even worse is that I got the pathetic docile looking smile followed by a meek "ooh sorry".

Is it something in the air today!? I could understand it if I was moored near a bridge or on a bend but I'm on a perfect straight and the canal is wider here than anywhere due to a marina basin on the other side.

Some good news.... I've got some new chillies growing! 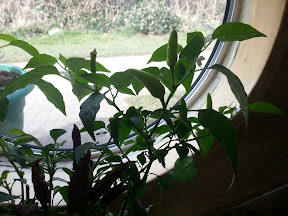 Should I use them whilst they're green?! Or leave them to go red?