- March 12, 2013
Well, it's the second day of our bathroom refurb and we don't really have a clue what's happening!

We decided yesterday, that it would probably be better if we stayed in the hotel another night as this would mean less stress for us, (as we'll be out of the way) and it also meant that Rob could crack on and get more done in a shorter number of days :)

That's the idea anyway! Besides, Edward has told us he'd like to stay for another night. He's enjoying the room service: 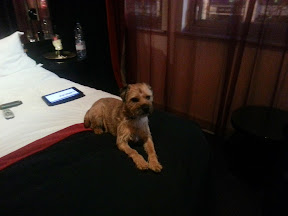 I gave Rob a quick call to find out how everything was going today, although he didn't give much away! I think he might be doing a late night again tonight though which is good. He's going to send over a picture or two later :)

Meanwhile, today we got to pick up the bathroom "furniture" that we had on order. It was cheap enough and quite nice: 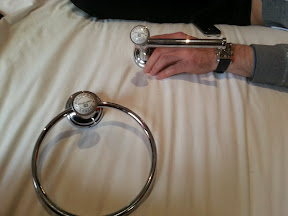 Back to reality tomorrow though, so I think I'll make the most of our last night in the hotel!!