- March 27, 2013
There's nothing much to report really. I got on with some of the varnishing in the bathroom as most of the woodwork has been left untreated for me to varnish up. I'm quite particular about how wood is varnished and like it when it's baby smooth!

That involves a lot of sanding, tacking off the dust/debris and then varnishing, followed by a light sanding between coats.

It's tough going especially when there's as much wood to varnish as what there is in the bathroom at the moment, but I've got two coats on today! I usually give everything that we've had done from scratch around 4-5 coats as that gives the wood a really nice sheen and I know that it's definately protected then.

It's been a nice still day today, although there has been cloud blow in with lots of snow which has then cleared again to reveal sunny skies.

I was impressed today that the solars brought in a maximum of 17 amps at one point and we're starting to notice how much less we're having to put the engine on for to charge the batteries. 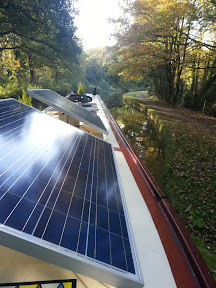 We do need a top up of diesel tomorrow, but will probably only get 40 litres and we guess that will last us quite a while, maybe until the end of May now, as with the longer days and warmer weather (hopefully) making an appearance soon, the engine will need to be on less and less! 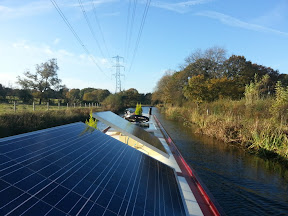 Please hurry up spring and give us some warmer weather soon!