- March 01, 2013
It was an early start this morning as Edward had his appointment at the vets at 9:45 and we had to have breakfast first, sort Eddie out and get down there. It must have felt even earlier for Pawel as he didn't get in from work until 3AM!

The vets was probably one of the best ones I've ever been to. She was really thorough, explaining about the kennel cough vaccination and explaining that dogs can still pick up the infection even after inoculation. She also found out for us that Eddie was due a booster vaccine. So, two vaccines all together! One up the nose and a needle in the back!

I have to say, I've never known Edward be so well behaved. Normally around people, he's bouncing around all over the place and making really annoying whining noises! However, when the vet was talking to us he just sat down, looking up at us all! He was even quiet in the waiting room.

I remember about 2 years ago when we last took him to the vets, he was crying so loudly in the waiting room that even the receptionist made a comment - something along the lines of: "Oh dear, what's the MATTER!?"

Looks like he's growing up! It only took 3 years! (Which apparently means he's now 27 in human years or thereabouts!)
We returned back to the boat and he's been the quietest dog ever - not sure if he's just worn out or if the vaccines have made him feel a bit ill. At one point I thought he was dead as he suddenly outstretched his legs and they'd gone stiff:(!) 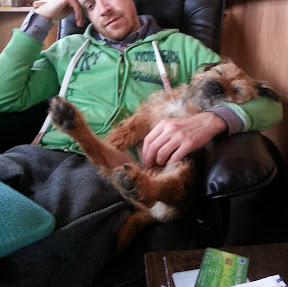 Nothing else happening here at the moment. I've had a bad day with my knee and in quite a bit of pain today so I'm taking it easy too for the rest of the evening.

You'd think me and the dog were two 90 year old women!!