- March 16, 2013
We've not really done anything significant today but we have been busy doing jobs. We've mostly been sorting out - trying to throw loads of stuff out of the engine room, sorting out a few more cupboards and the chimney was due a good clean which Pawel has done today.

I also had to wash, dry and iron the curtains today as they were looking a bit grubby from the work we've been having done. I meant to take them down last week and put them away somewhere but forgot! When Rob returns to complete the bathroom on Monday I will be sure to take them down then.

Later on we popped into town as we needed a few bits from the DIY store and some dinner from Waitrose - plus Eddie needed some food too! We stopped for a coffee in Costa and were sat in the window when suddenly a random horse came running down the street stopping traffic and nearly clipping an old man who had just come around a corner.

It was quite scary as the horse had obviously thrown someone off its back, as about 5 minutes later, they came running down the road in search of the horse red faced and looking in pain. Rather them than me.

I have often wondered if a horse gets loose like that and ends up doing some damage or causing a road accident who is held responsible (and if the person in charge of the horse can be prosecuted??)

Our friend also popped around this afternoon with a present for us! She came to see how our new bathroom was coming on and thought her present would fit in really well with our new "hotel bathroom": 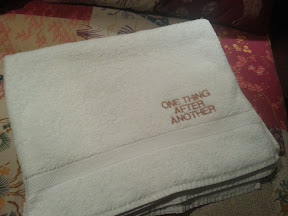 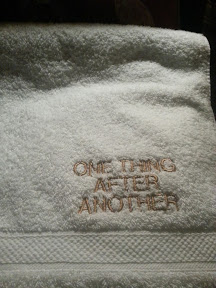 Thanks very much to M for the towels!