A Busy Day, But Back Home

There's still some snow around but today was really sunny again and as I write this tonight, there's a lovely sunset. When the sun was out, it was actually warm, but it was the cold air which made it still quite bitter when the sun hid behind the clouds!

Believe it or not though, we also had 32 amps from the solar panels at one point which has fully charged our batteries and meant that we've not had to have the engine on all day - only to do a bit of cruising.

We decided with it being nice we should finally move the boat back to our normal mooring. We've been gone for nearly 3 weeks! Despite the fact that we only topped up with water last week, it made sense to give the tank another top up seeing as we were moving and out and about - we also saw this fella: 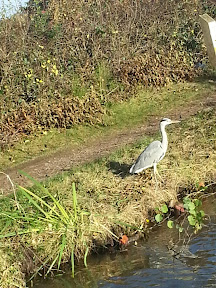 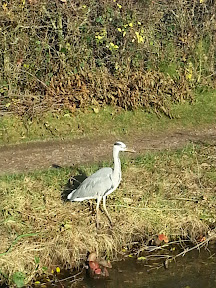 Heron's scare me a bit as their eyes look a bit zombie like and this one kept getting closer and closer to the bank even as we went past - he must have spotted a fish!!

Anyway, we topped up with water, emptied the cassettes and spent most of the day doing jobs - me being limited as always because of my knee. We were at it most of the day until around 3PM when Pawel had to then leave to do a full days work :(

Being outside on the boat makes you look at all the other jobs that need doing. It doesn't feel that long ago we washed and waxed the boat but it looks filthy and certain areas of paintwork need patching in too!

Not only that but I think we're going to mount our solar panels flat too as it will look a bit cleaner and provide a bit more stability for them - more on this later in the week.

Anyway, its really nice to be back "home". Being at the other end is incredibly busy and noisy and there's too many people for my liking walking around! So its good it be back and see the familiar view, although that view is likely to change in the next few days.....

I will tell you more as a surprise post in these next few days :)