- March 26, 2013
We awoke early today to bright sunshine and wanted to get up early today as it's my birthday and we wanted a nice full day! Anyway, with the sun finally showing it just made everything feel brighter and it was the first day of "normal" weather we've had since last Weds/Thurs!

After opening cards and presents with breakfast we decided to take Eddie out for a quick walk and that's when the reality of the weather hit! It's still absolutely freezing and the wind is still quite breezy and bitterly cold! Not long after we set off the snow started coming down again - it was quite bizarre as it was snowing yet still sunny?!

Finally after all the work has been done in the bathroom, we decided to have a sort out of the engine room as it's basically been a dumping ground the last few weeks. Part of that tidy up meant finally fitting the "Versatile" deck tiles that have been sat in there for ages. We bought them for the back deck but never got round to fitting them and I was sick of them taking up space in the engine room.

So despite the cold weather we got on with cutting and clicking them together as we thought it would only take around half an hour. A while ago, I painted the back deck as it had become really badly scratched, so it was painted in preparation for fitting these tiles which will now stop it getting scratched again. The "tiles" are made of plastic or rubber so they'll take the wear and tear in future!

Here's how the deck looked before fitting them: 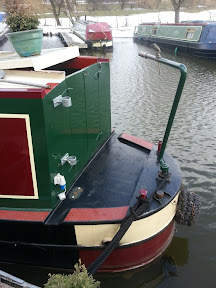 Getting on with fitting: 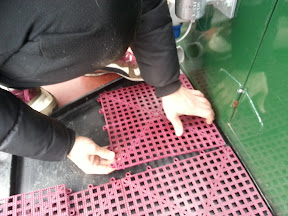 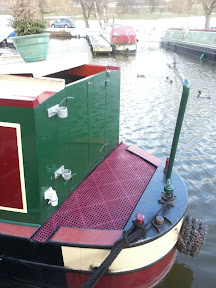 We're really impressed with them! I think on hindsight maybe a green colour would have blended a bit better, but they still match the red on the back and on the cabin sides and they brighten the back deck up, making it look a lot tidier.

Other than that, we've not really done a lot today. We did pop into Poynton and had a panini and a coffee and later tonight is just dinner and a few drinks - just the three of us. It doesn't get much better than that!