- March 22, 2013
What a night! Yesterday, the winds kept getting worse and worse throughout the day and by late evening they were buffering the boat severely, resulting in throwing the boat against the towpath bank and lots of rocking! It continued throughout the night and not much sleep was had by Pawel, Eddie or me!

I think I've said it before, but this time we both genuinely believe we've never had winds this bad on board before. At 3AM we had to go outside to re-tie the boat as the ropes had come slightly lose which was allowing the boat to crunch against the bank more than it should and even the fenders weren't managing to take the impact!

We kept thinking all the new tiles in the bathroom were going to be off the walls - but we've checked over them all this morning and they're fine!!

Even Eddie looked shattered this morning like he'd not slept all night and kept looking worried all morning!

Rob was due to come but obviously cancelled as the snow was quite bad where he is and there's no way you could really work on the boat today. The winds subsided a little bit during late morning, but they're still quite bad.

I've had to come into Manchester as there's no phone signals on either of our phones or Internet connection at all in Poynton and I had a few things to do online - so I'm writing today's blog from Pret!

Here's how things were looking out the front doors this morning when we got up: 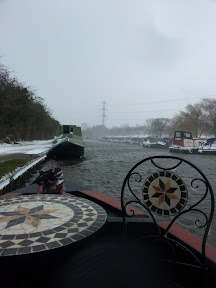 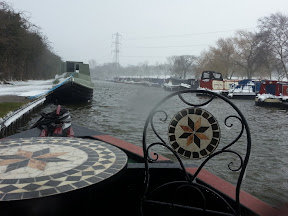 You can't see in the photos above, but there was snow literally blowing horizontally - the winds were that bad. I'm not sure what speed they were, as our weather station is inside due to us moving from our usual spot for Rob to work. However, on XC they were forecast as being 45-55MPH overnight. 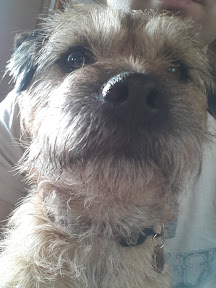 Poor Ed was that scared he didn't even want to go out when I opened the doors!

So, weather prevailing, I think Rob should be coming tomorrow now to finally finish off the bathroom - starting to all feel like a nightmare and jinxed now! Will we ever get this bathroom completed?! Ha!

Right, got to get the train back to the boat where I shall be in isolation with no Internet or phones for the foreseeable future!