- February 06, 2013
Well, everything from yesterday is now sorted, so I think, and today has been a bit more positive!

Amongst the drama of yesterday, the cladding samples arrived at our local chandlery. Oh dear! I can see they'd be OK in certain environments:

but they're definitely not right for in here: 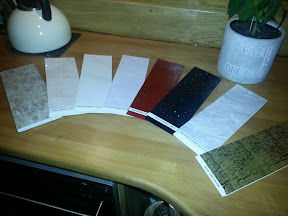 It's not the colours so much, or even the patterns, but my main concern is that when installed on the wall, they'll be no "grout" lines like with tiles or any sort of tongue and groove effect to break up each panel. So basically, it will look like one big mass of whatever design we'd have on the wall and I think that could look a bit cheap.

You can get chrome inserts for between each panel, but again, I think this could look cheap and a bit "early 90s"!?

There was one particular sample that we liked from them all, which was from a different range: 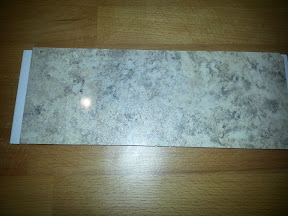 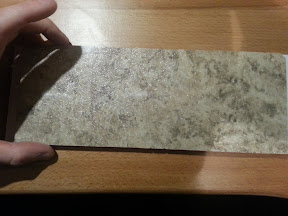 It's called "Woodland Beige" and has a subtle "shimmer": 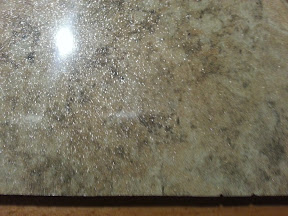 It's a high gloss finish with gold sparkly bits in. It'd be fine if we were just having, say, a shower cubicle done in it, but to have the whole of the bathroom finished with it - it just wouldn't be right.

It would look like part of the set from Cleopatra and I'd be expecting Liz Taylor to be sitting in my bath every time I walked into the bathroom :D 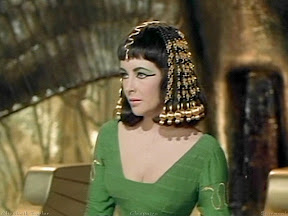 So, we think we'll be going back to the tiling idea. We both chatted and also agreed that to go with the cladding rather than the tiles would feel like we're compromising what we really want done.

The first 12 months on this boat were spent having jobs done in half measures, which has resulted in a lot of expense since to put it all right, so we don't want to go down that route again.

I'm going to call our boat fit out guy this week and talk about when he could do the job, payment etc and see if we can work something out.