- February 18, 2013
Well I started a mix for a new loaf of bread yesterday using my own yeast that has the ascorbic acid already added. 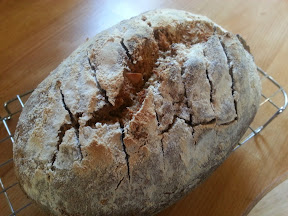 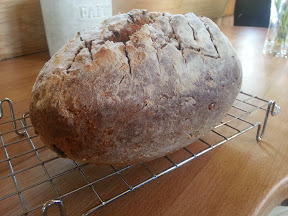 I'm not that impressed so far. It lookg good, it's just not a huge loaf and feels quite heavy so I have a feeling that its going to be a bit dough-y inside.

I think the problem is that I used too much rye flour. I've since found out that rye flour doesn't contain much of the gluten fibres that gives bread it's rise/texture. I looked at some rye bread recipes and most use a ratio of 5:1 wheat flour to rye and my ratio was more like 2:1 which could be where the problem lies...

I'm going to wait until its cooled a little and then I'll slice it to see what it looks like inside. If its more like cake or sponge, I'll chuck it!!