- February 02, 2013
We're still considering options for the bathroom, mostly cheaper options although we don't think it will be happening now at the end of February :(

Anyway, we learned from another boater about "Geo Cladding" as they've done their bathroom in it. It's the same sort of stuff as what we've got in our bathroom now, PVC cladding, but you can get it in all sorts of designs now!

We got ours from B and Q at the time, so hardly specialised and they only had one or two designs, but we've found loads of websites who offer the cladding in different colours, patterns etc.

Check out this web photo of a bathroom finished in it:

They also do 'tile effect' cladding with grout lines and everything. The nice part about it all, is that they do it in high gloss finishes s well which look really nice: 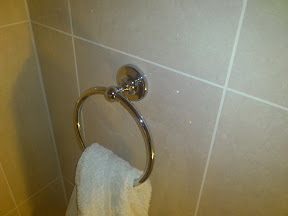 Not sure I'd go for the tile effect but the full length cladding strips which you can then add silver/gold trims to, in between each panel for a nice decorative effect.

We'd still get Rob in to do this for us so its done properly (ahem!) but it would be a lot cheaper in terms of the actual cost of the cladding and in terms of Rob's labour as he'd be able to do it in half the time (I'm guessing).

Also, apparently tiles aren't that great especially on a boat. Grout can leak, mould form etc. I was talking to Andy at our local chandlery, The Trading Post today, who gave me a bathroom tiling horror story from another boater. Apparently, the tiler had tiled in the shower pump! The only way to get access to it when it broke was to smash all the tiles off! Ooooops! Gave me a laugh at least!

He does have a point though. Even if using a "MarineFlex" grout/adhesive, I'm sure the tiles would be affected to some extent if you bounce off a lock gate for example (um, like we did last year!) I don't want tiles hanging off the wall or cracking and pieces of grout falling out!

We'll be thinking lots over the next few weeks about which option to go for!