- February 17, 2013
It's been another fantastic day weather wise. We were up quite early this morning as Rob was due to arrive at 9AM and we know that, more often than not he's early!

Anyway, upon getting up I noticed how warm it was despite the stove having gone out overnight - the indoor thermometer was showing 22.5!! I opened all the blinds and noticed the sun was shining in through all the windows on one side of the boat (the way our boat is moored, the sun comes in through every window on one side first thing in the morning - east!) and it felt warm through the glass! So I think that's what contributed to the warmer temperature inside.

Here's a view from the breakfast bar this morning: 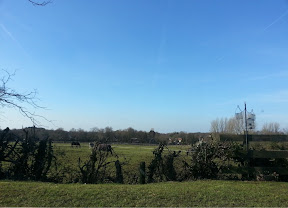 And out of the other side of the boat: 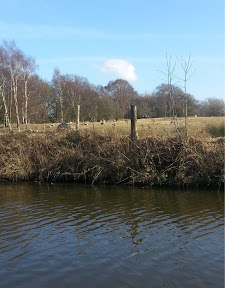 Anyway, we didn't bother relighting the fire and just got on with having a quick breakfast. Rob arrived spot on 9AM and we got down to what was going to happen with the bathroom.

There's so much to plan beforehand that to be honest, I can't even begin thinking about it, but here goes!

1. We are having the bathroom tiled in the following tiles that I've previously blogged about: 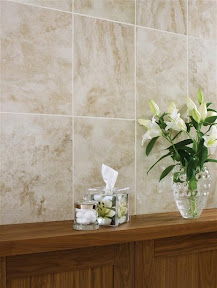 Only one upper oak lined wall will remain un-tiled and the rest will be done floor to ceiling!

We also found a tile in one of the Topps stores that we will have as an accent tile.

It's a striped design in bronze/gold/chocolate/cream about 60cm in length by 20cm in heigh which we'll have running lengthways at the bottom of the upper wall above the bath - just as a nice feature and to break up the monotony of the main tile design.

2. We're then having a new bath panel done in Sapele wood - the same wood as our doors and hatch are done in. Rob will do the bath panel in Sapele strips as well, rather than one big piece, so it will be similar looking to the hatch doors although just completed in vertical planks rather than in a 'herringbone' design.

3. New pipe work will be run off the existing pipes under our bath up the wall so we can have a separate shower over the bath with a shower screen fitted.

4. Rob will make a new vanity unit re-using parts of the old one to make a nice, fitted corner unit. This is what we have at the moment: 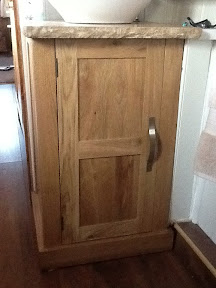 Ideally, it will look similar to one of these after: 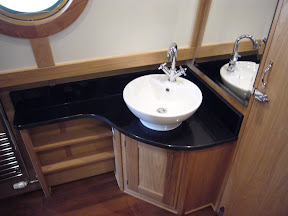 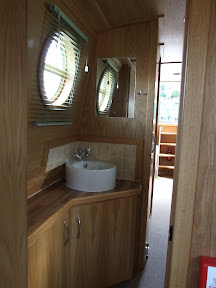 We won't be having a granite top - too expensive, but again will be having a Sapele finished top to tie in with the bath panel and also a new window frame around one of the bathroom windows on the wall that won't be tiled that Rob will also do in Sapele.

5. Rob will also make a wall unit for the bathroom too, again using the door/mirror off our existing cabinet to go above the vanity unit - again the cupboard will be angled and fitted into the corner. Here's our existing wall cabinet: 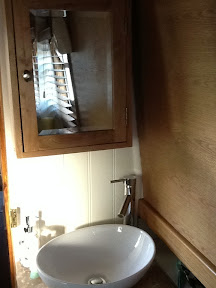 Phew! That's about it I think!

So now I need to:
* Order tiles
* Order a shower fitting
* Get a new tap for the sink unit
* Find/order/get delivered a shower screen...

.....erm, I think I've forgotten things but they'll come back to me!

The work is due to start now in the second week of March because of issues that we discussed with Rob and also because he has another job on until then too.

I'm excited about it but dreading it too as I think it's going to be the messiest and most labour-intensive job we've had done on the boat to date!

Imagine the clean up needed after!?

Rob had left by around 9:45 and so we went into town for a coffee and to stock up on some food with a trip to our butchers, as always!

I also stocked up on a few different flours ready to give my Breadmaking a proper go. I have a mixed seed flour but also bought a nice rye flour today and whatever bread I will make - I'll probably use a half and half mix of both flours.

I'll let you know how it turns out tomorrow as I think I'm going to start the mix this evening, letting it rise over night in the fridge.