- February 15, 2013
So is that now the end of winter? The end of the snow and the frosts and temperatures below zero?! Or is that wishful thinking?

Today has been a lovely day. Around 10.30 this morning the temperature was over 10 degrees outside. It's also good news as it means our solar array is becoming more relevant again with the brighter days and more sunshine.

I had a look at how many amps we were getting on our Outback MPPT controller just after 10:30AM: 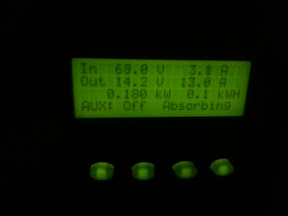 That is the most I have seen in a long, long time - 13 amps! I did briefly see it jump to 14 amps before hovering around 12-13 amps for most of the afternoon.

If you have a look at the picture above, on the left hand side, above the "aux" figures, you'll see '0.180kw' - that equates to 180w of power that we were getting! Not bad for a February morning.

It will be fantastic once again in summer when we don't have to have the engine on at all! (Only for hot water like I was discussing in my post Yesterday

I'm sat here writing this and just noticed how well our chilli plant is doing that was nearly dead when we got it. There's new buds and flowers opening up on it too which will turn into chillies soon!

Can you spot the flower? 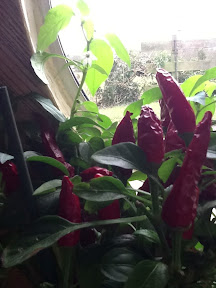 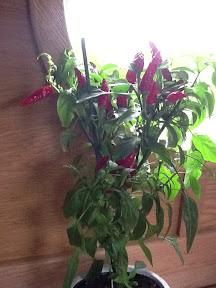 Right now, I'm just waiting for Rob to come over. He's working on another boat today but said he'd come over late afternoon to discuss our bathroom. He'll be doing the job - tiling and some carpentry - so we need to go through what is going to happen and what he's doing.

I'm a bit nervous about him coming to be honest, as I know there are so many issues with the bathroom, that I'm not sure he's going to be able to complete it to the finish and standard we're after. Although, saying that, nothing really seems to faze him at all so he'll probably just laugh at me for stressing about it!

I think we should wait a bit for the work to be done, but Pawel wants it done ASAP so we are hopefully looking at getting Rob in at the end of the month to start on the tiling. It's a big job as we've decided to go all out and have a lot of little fiddly things completed too, but it will all be worth it. Unless we go bankrupt beforehand!?

There's not much other news to be honest. I did get this the other day and will be making it tomorrow: 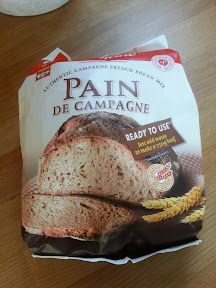 OK, so I know its a bit of a cop out - you only add water and then knead it a bit before baking....but I was intrigued because one of the ingredients is 'ascorbic acid' which is commonly known as Vitamin C!

If you've ever made bread at home, it can more often than not turn out a bit heavy and stodgy - not like bread you buy from a bakery or supermarket.

Apparently, (I think I read about this on Canal World actually!) that ascorbic acid can help "fluff" the bread up to give it that airy, fluffy and light texture.

Look on your packet of bread and as well as yeast, I'm sure it will contain ascorbic acid ;)

Apparently, you can buy ascorbic acid but I'm not sure where from? Maybe online??

Depending on how this bread turns out tomorrow I will start making the bread from scratch with the ascorbic acid in.
Although to be honest, this bread mix is only flour, yeast and acid, so it's not really 'cheating' and it might be best to stick with this as the proportions of each ingredient will be spot on.

I'll let you know how it turns out!