There's Jobs To Be Done!

- February 11, 2013
We were both off today and have had such a busy morning. In contrast to yesterday, I awoke at 7AM and but was in bed for a bit thinking about things and dozing before finally getting up at 8 as I knew we had to move the boat to top up our water tank and I wanted to get on with it.

When I looked out of the window, I noticed that we'd had a bit of snow overnight and the winds were still strong but not as bad as yesterday evening.

The curtains at the front door were looking a bit grubby and the other day I accidentally got a couple of coal marks on them so I firstly took those down and filled the twin tub up to start washing them.

A lot of people cannot believe I have a twin tub, but they use a hell of a lot less power than a normal washing machine which means we can run it through our inverter. We have a Sterling inverter and its only rated at 1600w which isn't sufficient for washing machines as they usually use over 2000w.

The role of the inverter is to basically take power from the 12v batteries which supply our electricity and convert or "invert" it into 240v at a maximum rating of 1600w. So any appliance we use must be 1600w or less. So no electric kettle and no washing machine!

However, I LOVE the twin tub. I actually find it easier than an automatic. OK, so you have to be a bit more involved, taking the clothes out, spinning, rinsing and spinning again but you can get a lot of washing done in a short amount of time, add extra things into the wash at any point as there's no locking doors etc. Not only that but with few electrics and no digital aspect there's not much to go wrong!

Every house I've had with brand new washing machines, they've broken down with one thing or another after 6-12months!

This twin tub we have is a mini one and only cost £60 and I've now had it eighteen months and its still going strong! It's out the way in the engine room as well: 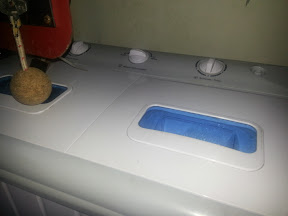 It's a good job there's only three functions, as all the controls are in German as well!

Anyway, whilst the curtains were on the first cycle, we moved the boat to the water point to top up. We also got a top up supply of diesel to see us through the next few weeks.

After that, I made us a bacon butty whilst we waited for the water tank to top up, after which, I got on with a few more loads of washing! Pawel then got the wet vac out to vac the bilges in the engine room as quite a bit of water had built up and needed removing!

I did a few other bits like adding a bit of window sealant around the woodwork in the new hatch and cleaning the oven, oh, and I also cleaned the windows - inside and out!

The rest of the day will be easy now! Dinner and some good films or programmes and plenty of wine :) 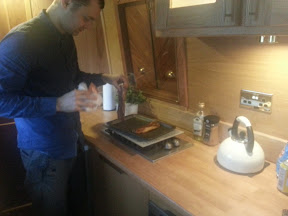 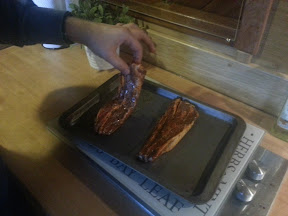