- February 14, 2013
We are always thinking of things that need to be done on the boat, out of necessity or just because we want! You can see more about that HERE

Anyway, it was Pawel's final evening at home yesterday before his work patterns returned to his normal evening hours, so we were having a chat about the possibility of installing central heating. It won't be something that we will do now until next year, ready for next winter as there's not much point now with the summer ahead of us.

To cut a long story short, we attempted to do it using the thermosyphoning method, but due to a lack of knowledge (at the time!) it kept blowing off the walls!!

This started to become quite dangerous after one night when we were sitting there and the pipes just exploded right next to us with scalding hot water in that had been boiling away in the stove for a few hours!

We know better now, knowing that it was due to a lack of a header tank rather than an expansion tank and a couple of other things (incorrect pipe size, using "L" joints rather than bending the pipe with a specialist tool)

However, last night when we were discussing it - despite previously thinking we would at some point run a central heating system off the back boiler, we decided that perhaps it would be more beneficial to instal a diesel-fired system. 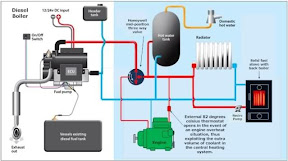 The main reasons being:

* It gives an 'instant' and convenient form of heat - especially in spring/autumn mornings or evenings, where you don't want to necessarily want to light a stove from scratch

* it'll give us a more constant heat in the bedroom ( I like my environment like the tropics ! Ha) which will mean putting less coal on the stove as at the moment we always put loads on just to get the heat through to the back.

* It could also heat our domestic hot water, as currently our only method is to have the engine running. In the summer we don't need to run the engine at all, only for hot water as the solar panels charge the batteries to full capacity. Therefore, this could alleviate some stress on the engine as its not good to have it running for just short amounts of time just to heat water etc

Another bonus that we found out was that you can also get some sort of device fitted to the diesel boilers so that they can be turned on or off remotely via text messaging. It sounds a little bit like a scaled down version of Empirbus where you can apparently set up most of your electronics in this way.

So it's a bit of a way off yet and we'd have to decide on which system to get as there's so many: