- February 03, 2013
Pawel was off yesterday so we went into town to our local butchers Tittertons to stock up on some goodies.

We went last week and had the most amazing bacon cut - it was a Cheshire Oak Smoked Bacon which, at the butchers, is just a lump of meat which you can then have sliced to what ever thickness you want.

So that was on the top of my list again!

Anyway, we've also been getting some prepared chicken breasts so we got a few with " Lemon and Garlic" and a few called "Dragon's Fire" which is red hot but lovely.

We also got a couple of Minted Lamb Shoulder Steaks. The guy in the butchers is really helpful and often tells us of "times gone by" and how it was becoming a butcher which taught him to cook! Suffice to say you can ask him anything about how to cook meat, such as how long and what temperature/gas mark setting and he'll know. (As any good butcher should know, although once in Morrisons, a butcher once said to cook a kilo and a half lamb shank for just 30 minutes! Even I know that would be waaaaay undercooked!)

Anyway, tonight I cooked the lamb steaks and served them with a minted cucumber recipe that I've been wanting to try for a while and involves cooking, yes, COOKING the cucumber!

It sounds a bit stupid I know, but you can cook cucumbers in the same way as you would any courgette or marrow, so here's the recipe...

1. So as I mentioned above, we had some ready prepared minted lamb shoulder steaks. You can have minted ones or plain ones, its up to you and we cooked on Gas 5 for 50 minutes until golden

2. Shortly before being ready to serve your lamb steaks, cut a cucumber in half and then in half lengthways. With your half lengths,simply cut slices around 1cm thick. 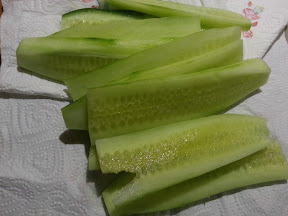 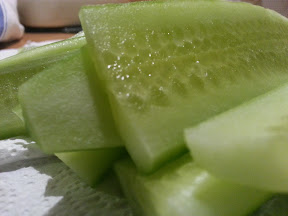 3. Heat your olive oil in a frying pan and snip some spring onions to fry off for around a minute

4. Next, add your cucumber, frying for about a minute on each side. 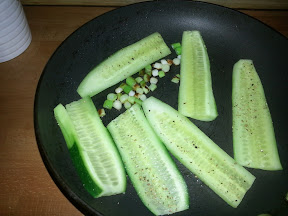 5. Take off the heat and shred some mint leaves over your cucumber slices and serve with the lamb steaks. 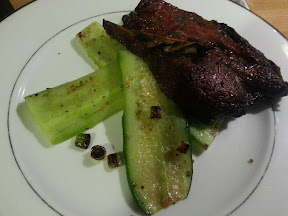 Well done to Tittertons - the lamb steaks were beautiful.

Boat wise, tomorrow I think we're going to finish putting some oak facing on the wall behind the bed, which at the moment is just painted ply board and its something we've never got round to finishing off.

It'll need some extra beading etc to finish it off nicely, but it should be a much better improvement on the bedroom. At the moment, the bedroom is the room that's really letting us down at the moment.

I'll post more about it tomorrow along with pictures!