- February 10, 2013
Last night was a strange night. It was one of the few nights that we truly didn't sleep. There was no particular reason for it as such, although on my side its because I'm worried about a few things. But basically, every half hour we were awake with one thing or another.

Firstly, we heard some little legs on the roof! We don't think it was a duck, and Pawel is convinced that whatever creature it was, had four legs. It ran the whole length of the boat and back again. Bizarre!

At one point, it then happened again and Edward freaked out and got out of bed and started barking (or, shouting as Pawel describes Edward's bark!) so we were awoken again! (Thanks Ed!)

Next, we heard Edward licking his lips which drives us both crazy! So at 4:30AM everyone was awake once more!

Next at 6AM, an alarm started going off. We didn't know where it was coming from at first - it was inside the boat, however. We then we realised that it was from a pocket watch that Pawel had bought from a boutique store in Manchester the day before. He liked it and thought it was unique and it was only £5.

It is quite a nice little thing actually and is now in our glass display cabinet. 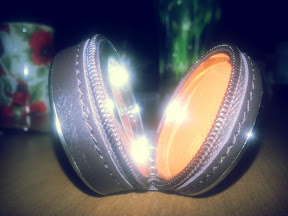 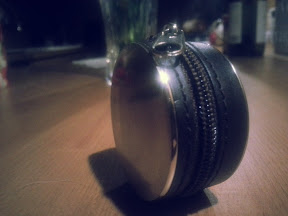 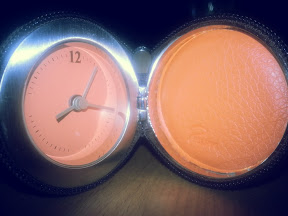 The mechanism on the back: 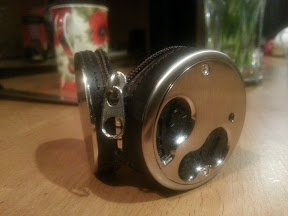 Anyway, all this drama resulted in us staying in bed until 11.30 this morning! Something we rarely, if ever, have done on the boat, but we were just so tired we needed the rest.

We later went into town to do some food shopping and visit our butchers, where we had a good chat about the horse meat scandal!

Upon our return, it was really windy back at the boat and is set to get worse overnight. The problem being that the wind is coming from the east and is therefore blowing the boat against the towpath bank, whereas usually, it's coming from the opposite direction giving us a bit less of a hard time!

For some reason, despite the stove still going whilst we were out, it's taken ages to get the place really warm. This is the first time I've ever really felt cold on the boat. I think it's the wind as its really blowing through the hatch, despite us having the Perspex glazing over the hatch doors and the hatch doors themselves closed and bolted!

Anyway, we're OK now but are expecting perhaps another night of disturbed sleep due to the wind!

Apparently, we are due to get some snow later this evening again and this is due to continue well in to tomorrow and Tuesday.