This morning involved a trip down to the butchers to get a bit of bacon and some decent bread rolls as all my efforts with the bread making lately have been bad!

I've been in a right mood/temper the last few days too and I don't know why. Today with the sun shining, I felt back to my usual self and so after breakfast we headed out to stock up.

It's been a gorgeous sunny day, although not too warm, reaching only 10 degrees at most, but we did have a coffee out on deck on our return.

It's still sunny out now as I write this and its gone 5PM. How bizarre - I can hear some sort of creature walking on the roof right now too! It must be a duck! Ha!

For the rest of the day, I've spent most of it sorting out the admin that goes along with life and a bathroom refurb! We've been trying to decide on showers, taps, shower screens, sorting things out for delivery and also my hatch glass. I've now decided to have the glass made with drilled holes in the top corners to allow me to fit mirror screws to hold it in place.

I was against this at first, thinking it will be a real effort to take the screws on and off every time we want to open and close the hatch, but after thinking about it, I think it's the safest option to make sure that the glass is secure when it's in place! Imagine it falling!? It could do some serious damage if not installed safely.
I'm also going for a toughened glass rather than a laminated one - thanks Roger for the advice!

It'll only be the top of the glass that will have the drilled holes in for the mirror screws, as the bottom of the glass will sit on the fixings that act as a ledge at the moment for the Perspex. Here's a sketch that I've sent over to the glazers: (it's not to scale!) 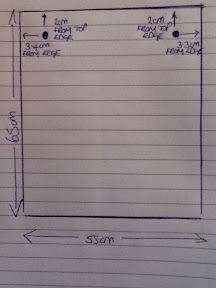 The glazers have given me a really competitive price too - only £26!

I'm currently in the process of making some more wine right now too. My last batch of red was just too weak, so this time I'll be making it with more sugar to get a higher alcohol content.

Here I was sterilising everything: 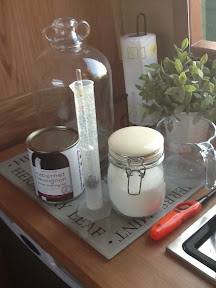 Its only a kit from Wilkos - some are OK and others aren't. The white Elderflower is amazing! However, I find a brand of kits called Beaverdale the best, whilst these Wilkos ones always need a bit of tampering to make sure you get good wine.

They're simple enough though:

* You start by sterilising all of your equipment using a sterilising solution, then tip your can of 'juice' into your demijohn followed by adding a water/sugar mix.

* You do this by melting around 450g of sugar into some water which you will use to top your demijohn up.

* I've just done this and filled the demijohn up to the shoulder and I'm about to test the Specific Gravity now. This will tell me how strong the wine will be when it's finished. However, with this kit, I'm expecting the Specific Gravity to be a bit on the low side.... By taking some of the mixture back out and adding a bit more sugar followed by heating it (to dissolve the sugar) I can increase what the final % will be! 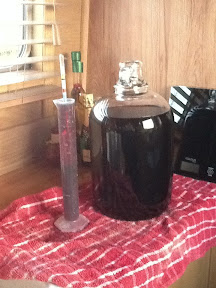 In this picture, you can just about see the reading as 1070 on the hydrometer: 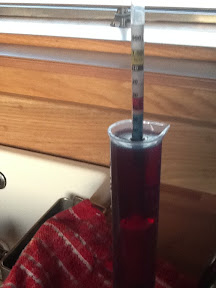 (I'm going to take another reading in around 10 minutes to see if that's still the same and then I will dissolve some more sugar into the mix.)

* I calculate that I will need around 8oz of sugar - around 225g to take the SG up to around 1095 to get a stronger wine! After dissolving all the sugar, I can then add the yeast which will start the fermentation!