- February 16, 2013
It's been another fantastic day weather wise, to say its only mid-February. It's been 11 or 12 degrees for most of the morning and afternoon and full on sunshine.

It really was lovely and meant we could even sit outside again for a little bit with the radio and a coffee.

The best part is that the engine hasn't needed to go on yet either and the batteries have charged from 81% up to 99% this morning.

Another plus is the stove is just on tickover - just a small handful of coal and all the vents closed off - its been like that now since yesterday and I've not even used a full bucket of coal in nearly two days!

Well, Rob never came yesterday as the job he was doing was running a little later than it was supposed to. He is coming tomorrow though, which is better in a way, as Pawel will also be here then to go through things. 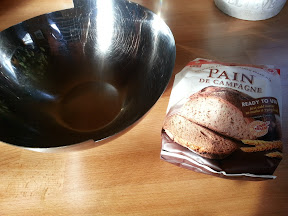 My first job this morning was to start making the bread mix that I was talking about yesterday!

It was pretty simple really. I just put the flour mix into a bowl and added around 325ml of warm water ( half boiling and half cold) 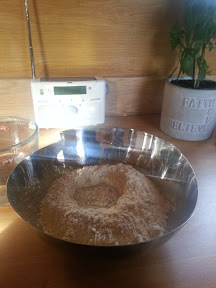 I then combined it all and kneaded for about 5 - 10 minutes until it was really pliable and elastic-like: 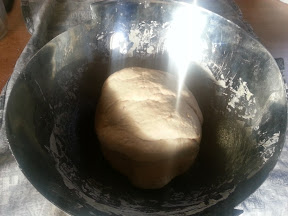 I covered with cling film and left to rise for about 35mins and it had definitely doubled in size in that time: 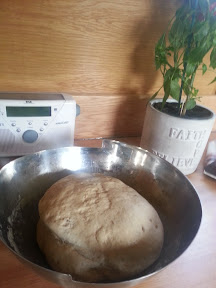 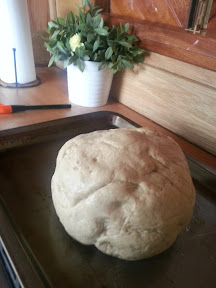 I popped the bowl back over it and left it to rise once again for 50 minutes as directed and again, it was HUGE when I lifted the bowl off! 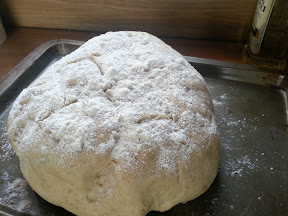 I cut a cross into the top and then dusted it with some extra flour. Along with the bread on the baking sheet, the instructions recommended that a small bowl of water was put alongside....and off it went into a Gas 8 preheated oven which was then turned to Gas 7 once the bread went in: 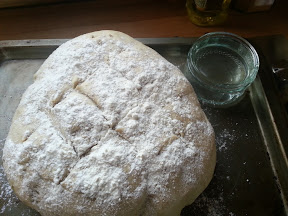 Around 35 minutes later, the bread was ready and looked great 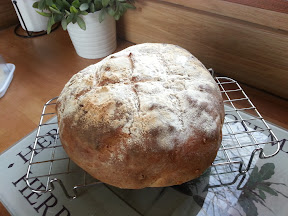 Slicing it was going to be the proof in the pudding: 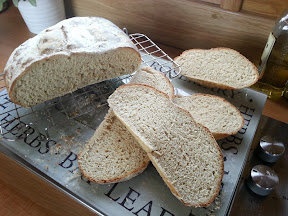 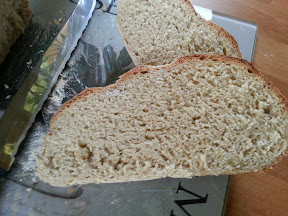 It was fab!! Really light and airy, just how you want home made bread to be and not like sponge! I sometimes have found home made bread to have a funny smell which usually means it's only fit for toasting, but there was none of that with this. I'm convinced this is due to the ascorbic acid.

Anyway, it was perfect for cheese and tomato sandwiches: 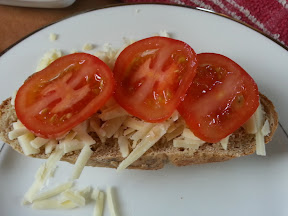 I looked at some yeast that I've had in the cupboard for ages and never used and was surprised to see that this particular brand also contained the ascorbic acid in with the yeast.

Therefore, I'm going to give the bread making a go with my own flours and yeast tomorrow if there's time and see how that turns out now I know that the yeast also has the acid in. I'll be expecting a similar result.

The only reason I'm doing this rather than sticking with this packet mix, is that the packet mix was a bit pricey at £1.89 - no different to the price of some of the fresh baked breads off the bakery in Waitrose.

The yeast I have cost about £1.50 for 10 sachets ( from what I remember!) and I can get a malted rye flour for around £1.60 a kilo which would make 2 loaves. This would work out much cheaper and make it more worthwhile to make rather than buy bread.