- February 09, 2013
Today we had a couple of hours spare as Pawel was starting work a bit later than usual and we've not been doing much else really. So, we decided to tackle a job that should get done more often than it does - stripping the dog!

Eddie's a Border Terrier, so unfortunately you can't send him to a dog groomers to have his fur clipped. He has to be "stripped" which is basically where you pull the fur out!

Sounds painful and torturous but if you do clipper a Border, their fur apparently grows back all fluffy and not the trademark "wire"-like fur that Borders traditionally have.

You can see where you need to pull it out as the fur grows in 'clumps' and you can see where it is longer than the base coat underneath. He hates having it done and will yelp and scream until its over, but he does get plenty of treats whilst having it done. I'm sure he knows he'll get more of them if he makes more of a scene!

Certain areas he's fine with and will sit there and let you do it no problem but then near his tail is where he will start to cry a bit.

Here he is having his fur done: 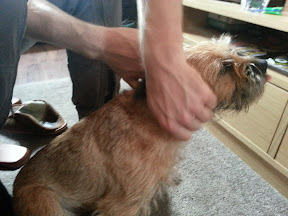 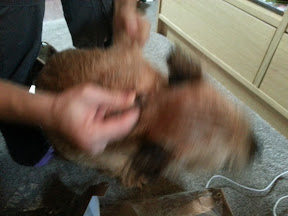 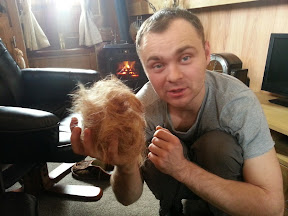 It's just as unpleasant for us really as when he's crying you feel guilty, but it has to be done or it ends up matted and with a dog that looks really scruffy and uncomfortable as he gets too hot with all that fur!

Done for another 6 months now anyway.

Nothing else new really. Pawel is going to be off for the next few days so we will be thinking and planning our boaty vegetable garden in a bit more detail and maybe getting some pots and seeds etc

I did pick up some seeds from Wilkos today actually - only some cherry tomatoes, the small round carrots I talked about a few posts ago and the dwarf beans. They were a bargain at just over a pound each!

I think I'm going to need one of those small collapsible PVC greenhouses though to start things like this off, but probably won't start until mid-March anyway. Something like that will also help keep it all in one place and tidy.

We have a local cheap shop in the village where I saw one of those greenhouses and it was only £10 - so a bargain if it gives me loads of fruit and veg ;)