- February 19, 2013
Today has been an amazing day. There was a heavy frost this morning and most of the canal was frozen over too but that quickly defrosted when the temperatures rose to over 13 degrees by lunchtime.

Its been that warm today that we've just been having a coffee outside the boat on the strip of land next to us and cannot believe we were sat outside and warmish in the sun in the middle of February! Just a shame the nights are still a bit cold!

So yes, today has mostly been an outdoor day, such as tidying up the pots outside etc with Eddie keeping watch over the boat all day... 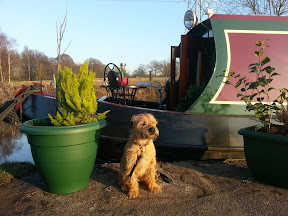 Pawel also potted some garlic bulbs that he picked up from the garden centre yesterday: 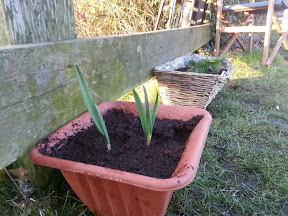 And whilst we had some spare compost, we thought we'd sort out last years strawberry plants (that seem to be doing quite well for February!)

I remember last year when we got these strawberry plants. We were on a cruising holiday when it was really hot weather last March and found a country garden centre - just a tiny little place run by one woman.

Anyway, we picked up the strawberry plants then along with a blueberry bush and a few other plants. However, we got back to the boat and realised we'd got no compost so, as you do, we went to the woods near where we'd moored the boat and dug up loads of clay-like soil out of the ground (using our hands!!!) It wasn't the best and we had water logged strawberries for most of the year!

So at least the strawberries should be a bit better this Year now we've given them some fresh, decent compost! 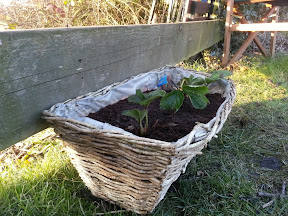 Here's a picture of my dwarf daffodils as well (along with Pawel's garden owl!!? He loves his owl, he does!) which are now starting to flower - I hope the frosts won't kill the flowers off! 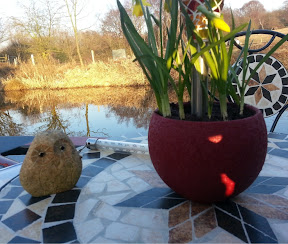 Nothing more to report, dinner later with a few glasses of wine and some TV.

We've found a new Guy Martin program on 4OD online which was originally on Channel 4 last year called "How Britain Worked" where he's involved in a few different restoration projects, so I think we'll probably sit and watch a few more episodes of that.