- January 22, 2013
I've not had time to make a proper post today as I'm still acting like a perfectionist over the new worktop we had installed just before Christmas.

We found out too late, that the other worktop is Birch and the new one we had installed was beech, so to match them together we decided to stain the new worktop so they both would match better.

Stupidly, and I should know better, we coloured the new worktop with a coloured varnish which kind of goes on like paint, and looks incredibly artificial.

About a week ago, Pawel scratched that coloured varnish off accidently with a baking tray(!) resulting in the whole lot needing to be sanded back using an attachment on the drill... 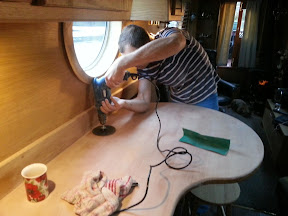 What a mess that caused ! Imagine having a load of sawdust and blowing it around with a hairdryer - we had the worktop sanded back but were left with that mess!!!

Anyway, through boredom with me not being able to do anything because of my knee, yesterday, I took a stool to start re-varnishing.... OMG!!

After a few coats of varnish, I noticed that the worktop looked worse than ever! Varnishing highlighted every mark and scratch caused by the sanding attachment we used on the drill, despite me having sanded using a light sandpaper before applying the new varnish.

It looked a mess this morning and I was unbelievably :

The kitchen was ruined as far as I could tell and my mouth would not stop bitching about it to the point where I think Pawel was going to insert cocktail sticks into his ears.

A trip to the DIY store in a taxi resulted in me buying a solvent to take the varnish off yet again (rather than sanding again!)and more stain and varnish which I will attempt in the next few days.

I'd heard and known about solvents that can strip paint or varnish but had never used them and that's why we went ahead last week and sanded rather than using that method then. Therefore today , using a solvent was kind of an experiment.

We applied the solvent onto the worktop and the varnish came off like butter. Now I'm angry that we didn't use a solvent last week rather than sanding it back and having all that dust everywhere!!

Lesson #1: Use a solvent to dissolve old varnish and don't sand!

Lesson #2: Don't use coloured varnish - it's too artificial and streaky looking.

Lesson #3: Don't ever, ever, ever attempt anything related to DIY ever again!!!