- January 28, 2013
We've had an action-packed day. We awoke around 9AM and despite the weather forecast showing that there should be heavy winds, it was all quite calm.

We had a spot of breakfast before deciding to head back to our usual mooring spot. We actually missed it and couldn't wait to go back, if nothing more than to watch the birds at our bird feeder that we installed when we first moved onto the farm-end mooring.

Pawel was so excited about his return, that later on in the day when we went shopping, he bought 2 loaves of "FRESH", yes, FRESH bread to throw away on the ducks. It wasn't cheap bread either from Waitrose which is ridiculous just to throw out the hatch for duckies! *Not Impressed.com* 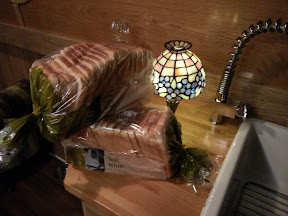 Anyway, around 1030AM, we set off from the mooring we were at and said a final goodbye. It was a later start than what I wanted (as usual!) and the wind had picked up quite a bit by then as well and we had to turn the boat twice before we'd be safely moored up!

We stopped for water on the way, so we now have a fresh, full tank of water so don't need to worry about that now for the next couple of weeks. We then headed back to the mooring, turning around and reversing into it as we wanted to face a certain direction and have the hatch on the canal side rather than the towpath side. That proved a bit of a challenge with the wind, and I think we did bump into a boat, but no damage was done (sorry!)

For some reason we see a lot of other boaters reversing in perfectly straight lines, but this boat never reverses straight and ends up all over the canal, so even on a still day it's a bit of a struggle! But, we did it and managed to get back into our space and were moored up by 1PM.

The weather had turned quite severe by then with heavy gusts hitting the front of the boat which is still continuing even now as I type, and the rain had started to come down too. It's set to get worse overnight and be with us for the next week really!

Here's our forecast for the next couple of days: 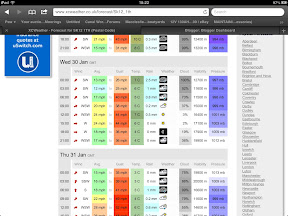 Around 2, we headed to town to do a bit of food shopping so all that's left now is to cook dinner and watch a decent film!

Oh, we topped up the bird feeder again today as well, so everyone is stocked up on food and Eddie even got these biscuits as a treat from the supermarket today: 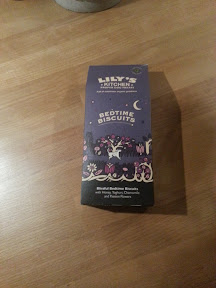 I bought them as I thought they were funny and a bit ridiculous. "Bed Time Biscuits" with...wait for it....Passionflower and Chamomile, "to help with a blissful good nights sleep"!!

So basically then, I'll use them as a good sedation method for when he gets too out of control!!!!! 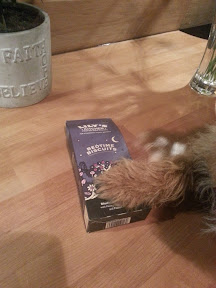