- January 10, 2013
The return of winter is apparently on its way! Yesterday was only around 3 degrees outside most of the day and it did feel noticeably colder. I didn't want to be outside for any more than a few minutes!

Today has been the same, reaching no more than 4 degrees but we did manage to have a hot chocolate outside at Baileys Trading Post!

Right now the temperature on the weather station that I got for Christmas is showing 2.5 degrees and apparently tonight it's meant to drop down to around minus 1 or 2. We decided today that we'd best top up with water before the big freeze happens! 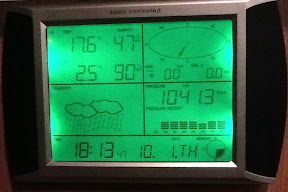 I feel that it may be quite cold for a while again as the same thing happened last year in January despite Christmas time being quite warm.

We have the added issue of our mooring not having a water point next to us on a pontoon - we don't even have a pontoon as we're on linear moorings. It's not far to the nearest water point though, but would be a problem if it freezes for more than 3 or 4 weeks.

So, we took the boat out today to top up and get it over and done with - making sure we're well prepped! Not only that, but we need to have the boat nearer to the visitor car park for our joiner Rob returning tomorrow to re-do the hatch and finish off some other woodwork . He's bringing some cutting machines that he'll use via his own generator in the van so the boat needs to be close by so he doesn't have to keep walking back and forth!


It feels a bit strange just a bit further down the canal in a new mooring position. Here's the view at the moment out of one of the kitchen portholes: 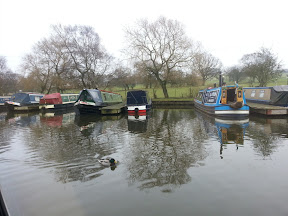 We didn't get up to much yesterday afternoon/evening but I did have a bash at another polish dish for us both to eat for dinner. It was a Beetroot Soup (Barszcz) with pork chops.

I was excited about cooking this as I knew the colour would be amazing. Here's the recipe if you want to have a bash - it's a recipe to serve 2 people with the pork chops but the soup probably could easily serve four.

1. Take all your veg - the Beetroot needs the stalks cutting off and peeling. Whilst doing this, pop your pork chops into a frying pan to brown them off. 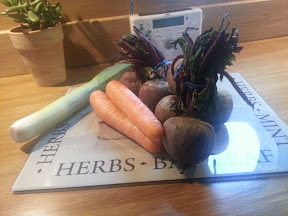 (Wear some latex gloves for peeling your Beetroot. It's not pleasant I know, but its better than having pink hands for a week, unless you've got some weird pantomime role to go into after which requires such special effects!)

2. You want to grate around four of the beetroots into your pan. The remaining beets need cutting into quarters and will be taken out after - you only really want the quartered ones for the colour. 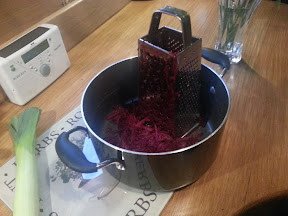 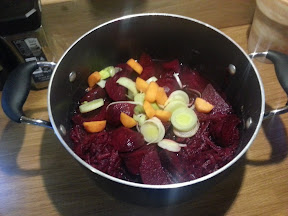 4. Add your chicken stock, a bit of pepper and your bouquet Garni to the pan. Also,add the browned pork chops into the soup mix 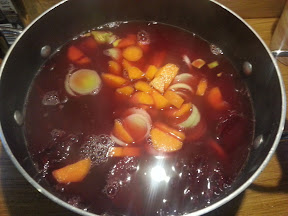 5. Bring to a light boil but then reduce the heat to a small simmer - rapid boiling will change the colour of this soup. 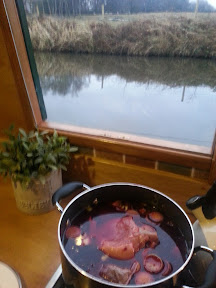 It basically needs cooking until your veg and the pork chops are cooked through. We had it going for about 40 minutes I think.

6. Just before serving, squeeze half a lemon into the pan and give a stir. You can fish out the quarter of beetroots or just leave them in the soup. You can eat them too though or leave them out - they should sink to the bottom of the pan anyway.


The lovely thing about this meal is that it can be served with the pork chops and the soup together - a bit like what we call a casserole here, or you can have the soup as a starter and then serve your pork chops with some crushed potatoes as a main course after.

Last night I had everything together, whereas Pawel did have the soup first and then his pork chop and crushed potatoes as a second course (with a bit more of the soup poured over his potatoes for good measure!) 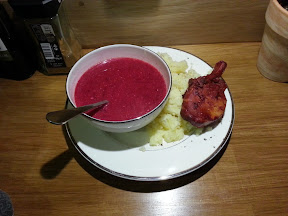 The colour of the soup is amazing and even better if you add a spoonful of sour cream into each bowl just before serving.

Not only that but the pork was great too - really buttery and tender from a mix of cooking the meat in the soup and the acid from the Beetroot I imagine.

A thumbs up from me!

This is what inspired me to give the word "Beetroot" to Heather from Takey Tezey yesterday so that she could make a random blog post from it! I await for some good reading later!