And Then It Was All Green

- January 27, 2013
We woke up really late this morning...for some reason I just couldn't be bothered. I looked out the window and everywhere was back to being green!

The view today from the hatch: All the snow everywhere has completely gone. The canal has also almost completely defrosted, helped along today by some arsehole who decided to come tear-arsing down the canal to break the ice, only to get stuck just in front of my boat.... He then reversed back, sending more sheets of ice against my blacking and then tried forward to no avail.

It ended up with him and his family at the front of the boat, kicking and punching the ice to break it along with his missus who had an 8ft pole, also attempting to break the ice. Twats!
It was more infuriating by the fact that once they'd broken through all the ice, they carried on for a bit, turned around and then came past again, to head back to their usual mooring spot in their 'lovely' marina. Definately weekend boaters who (stupidly) thought: "Wouldn't it be nice to have a trip out today!"

Anyway, rant over, I did not a lot else today! To make up for some of the guilt of staying in bed until nearly lunch time ( I never do that these days!) I thought I'd silicone between the worktop and the gunnels as there was a really horrible, dodgy looking gap! 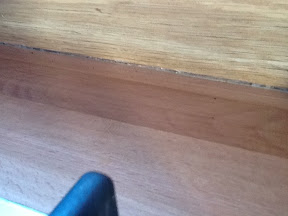 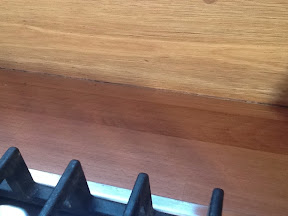 See? It looks like its just not quite finished off, so thought I'd give it a go especially seeing as I'd got a new tool to finish the sealant off (rather than using my finger and making a balls up of it!) 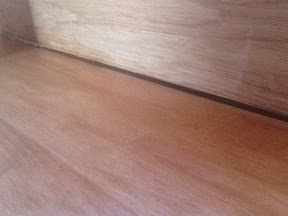 So finally, the worktop is varnished and looking good and the edges are sealed off and smartened up!

I'll get some decent pictures up in the next day or two as Pawel had his phone at work with him today (better camera) and pictures never look quite right when I take them using this iPad camera.

I finally finished the worktop the other day after using a solvent on it to strip it back, as I mentioned last week. To then get a more 'even' match with the other worktop, I used a stain (light oak), followed by a matt varnish rather than the satin I had previously used.

That stain matches the other top pretty well and also takes out the horrible pink pigment that beech wood is renowned for.
More pictures to follow!

I won't be doing anything else today now. I'm off to cook dinner and sit myself down to Dancing on Ice with a glass of red wine.