- January 17, 2013
Apparently, the weather is due to be really bad in our area overnight and tomorrow. Winds have been forecast for being around 35-40MPH easterly, along with heavy snow for most of tomorrow.

In preparation, (just in case, for once, the forecast is correct) I've tilted our solar panels to an easterly direction (the forecast wind direction for tonight/tomorrow).

We have our panels mounted on a tilting ball system so if they're tilted away from the wind then the wind can blow under them causing movement/banging on the roof and in some cases, can dismount them completely! They're chained to the roof so won't blow or fall off the balls completely onto the towpath(!) but its still worrying!

Tilting them to the wind will make sure they should stay pretty still. It's only 1730 and already I can hear the wind picking up. Normally I don't worry too much about the positioning of the panels, but I expect it to be a bit more severe where we're moored at the moment, as we are now in a wide "flash" area and generally a lot more exposed than what we are usually in our normal mooring space.

Here's a couple of pictures which show our tilting panels at various stages throughout our boating life!

A couple from the tiller from June last year: 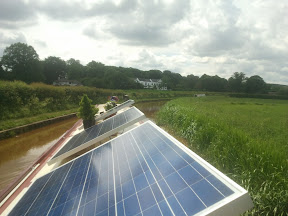 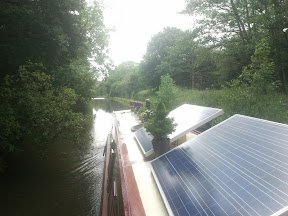 Views from above (and I think, the first pictures of me on
the blog!): 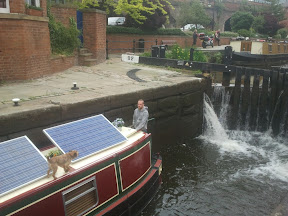 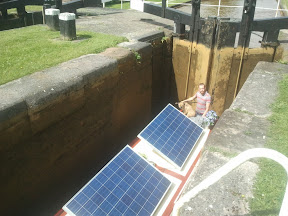 A view with Pawel and panels flat: 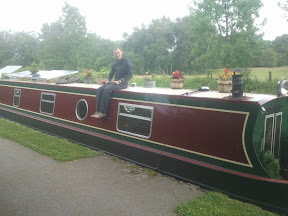 At our old mooring in Manchester: 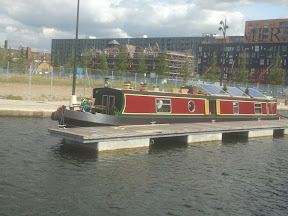 A random picture of us moored somewhere last year that ive just found and thought was nice: 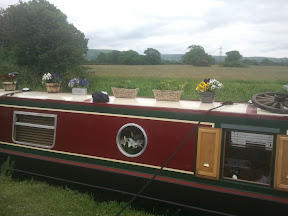 Back to reality....this is what it's like where we are at the minute!! 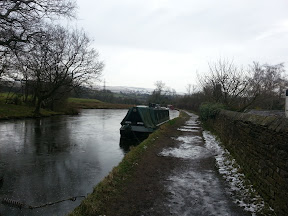 Still nice, but a bit bleak!!

Anyway, back to solar panels...They are domestic sized panels and are usually installed in house installations. We decided to go for some large, high powered panels last year as at the time, we did have a lot of electrical equipment which would take quite a few watts/amps! The summer was fantastic! We didn't have to worry about anything electrical that we used! The batteries were always at 100%.

This coming year, we now have fewer electrical items, so we will probably increase the battery bank so that we can 'store' the energy and be able to use it over a longer timeframe.

That will be much more important for us next winter as it will mean we can store the little energy we do get from the panels in the dark, miserable days into more batteries and we won't have to have our engine on so much - that's the theory anyway!

Now, some may say that these panels look an eyesore, tilted like they are, BUT, I cannot even begin to tell you the difference of having the panels tilted in terms of performance, especially in winter ( when a few extra amps can be REALLY important).

Having the panels tilted in winter when the sun is lower in the sky can change the amps we get from the panels dramatically. If we put our panels flat, (and I did test this last week and have done throughout the year in different conditions, seasons etc) we get around 3 or 4 amps on a good day at the moment. When I tilted the panels, that increased to 7/8/9/10 amps and can be a bit more depending on the type of day it is.

If you have solar panels and currently have them mounted flat, I'd strongly suggest having a tilting mechanism installed just to optimise performance.

Who'd have thought this post would have ended up about solar panels!? It's made me forget about the impending snow and gales anyway!