Do all your other boaters get cabin fever!? Come on, be honest! Sometimes in here, I could quite easily light a match to the place and walk away...

Well that's how I felt yesterday with all the problems with that damn worktop!! So, we went out into the local village for a coffee and to do a bit of shopping as P was off. Anyway, not far from the local Waitrose where we normally shop, we found a butchers - Tittersons! We'd never been there before but decided to have a look in the window (despite it being slightly off-route!) for a peek.

Tittersons butchers was great! They had a selection of meats, chicken, beef, lamb etc but also a section with "prepared meats", all sorts of stuff, such as "Chicken with Lime and Ginger" and "Spanish Chicken" (garlic,chilli and herbs) and ready chopped meats for stirfrys!

Not only that but they also have a deli counter - selling sausage rolls, pies, potatoe cakes etc! 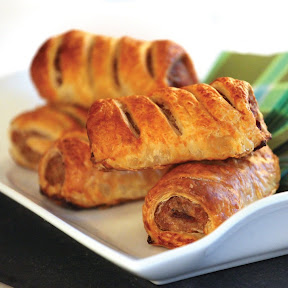 Anyway, I decided to buy a couple of sausage rolls which we had with our coffee in Costa along with an egg mayo sandwich from there ( a costa coffee sandwich - not great, but adequate!)

Pawel is polish, and doesn't 'get' or understand the British desire for meats wrapped in pastry - sausage rolls, pies, pasties - he can't bear stuff like that.

Slowly, I've got him into eating stuff like that though, but he's never really fond of it. However, he tried that sausage roll from the butchers and couldn't stop praising them!

Needless to say, we went back to get some Spanish chicken for dinner which we had with some golden vegetable rice and a feta cheese, tomato and cucumber salad.

It was an amazing dinner and the chicken breasts were huge! Pawel also tried their potato cakes which he had as a snack beforehand (and loved) so we will definately be going there again!

No pictures sorry as we were too busy tucking in!

It's bloomin cold tonight - minus 2 on my weather station, so I'm gonna chuck some more coal on!!