Polish Cuisine and a Poisoned Oven?!

- January 03, 2013
Please can we not have one day where something doesn't go wrong in this boat?! What's even more annoying is that everything is brand new or only around 12 months old !
I noticed this afternoon when I put the LPG oven on, that the flame wasn't changing or getting more intense as I was turning the oven up through the gas mark settings.

Apparently this is a problem with the thermostat. Now, because its gas we're not going to attempt anything by ourselves with it but it means another bill now for someone to come in and possibly replace an expensive part!! It might be cheaper to pull it out and fit an electric oven that has a 3 pin plug!? It would mean having to have the engine on though every time you use it but I wonder if it'd be worth it. Much less complicated, not so many BSS issues etc..

So today I'm feeling a bit pissed off with the boat. Maybe I need to get out as its some sort of cabin fever!?

P is off tomorrow so I've booked us in to a pub/restaurant in Disley which I found by mistake a few weeks back when I got off the train one stop too late. It looked lovely and I've always planned on us going there after Christmas. That'll give me a break away from the boat!

P is polish but we've never really had polish cuisine since we've been together as such, as the few polish dishes I have tried, I haven't liked and P can never be bothered to make things from scratch -Polish food is very time consuming to make!

However, the other day I felt that maybe this should change in 2013! I know P likes Pieorgi. The closest way to describe what that is, I suppose, is to describe it like ravioli. You can put all sorts into them and a popular variation over there is to fill them with mashed potato and cheese. It all sounds a bit carb heavy though!

Inspired by my Brussel sprout mix from Xmas (Brussels thinly sliced and fried with bacon and chestnuts) I decided to make Pierogi from scratch with an English twist.... I also broke another rule in the fact that they're usually made with plain flour, but I only had a bit so used half plain and half self raising. P said they tasted lighter than the ones back home and gave them the thumbs up, so I'll be doing this again in future!

Method:-
1. Heat the butter in a frying pan and get to a decent temperature, but not too hot where the pan starts smoking. Snip up the bacon with a pair of scissors into bite size chunks into the pan and fry until crispy.

2. Whilst the bacon is frying, thinly slice your Brussels. Once the bacon is going brown and crispy, add the Brussels making sure that all the slices are coated in the butter. Add a bit more butter if necessary. Let them reduce down then switch off the heat and leave to cool. 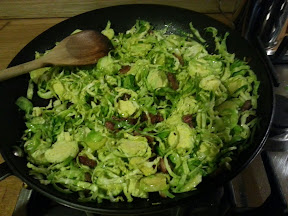 3. Get on with your pierogi "dough". In a bowl add the flours and pinch of salt. Then add the eggs. 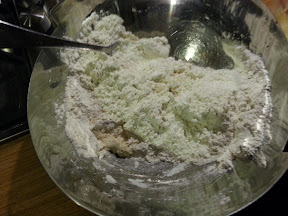 4. After the eggs start adding the water a bit at a time - flour can absorb water at different rates depending on the temperature etc - you basically want to add enough water to make a nice ball of dough which comes out of the bowl clean. It should be quite firm.

5. Knead this dough for about a minute. Cover with cling film and rest for about 15mins. 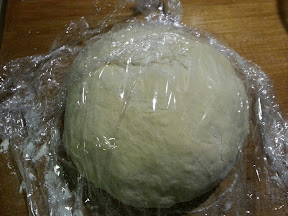 6. Cut your ball of dough in half. Flour your work top and roll half your dough out until its about 3/8" thick.

7. Using a 3 or 4 inch cutter ( or just use the top of a cup like we did) cut out your circles ( its a bit like making jam tarts at this point!) I think we had about 8 or 10 circles for each person to eat when they're finished. 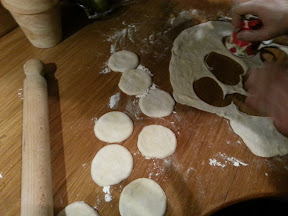 8. Once the circles are cut, start filling them with the Brussel mix adding about a teaspoon of mix into the middle, holding the mix in place with your thumb and then folding the circle in half with your other hand, a bit like below (it is a bit tricky!) 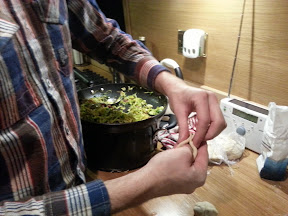 9. Crimp the edges to make sure they're sealed 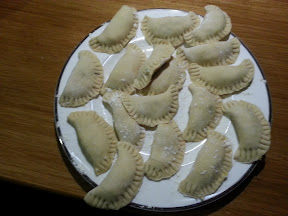 10. Bring a large pan of salted water to the boil and add the pierogi. Boil for around 3 to 5 minutes, until the dough/pastry is soft.

11. More often than not these are just eaten out of hot water but I didn't think that was for me! They look a bit too wet just like that!!!!

So after they boiled i fried them in some oil with some chopped onions. 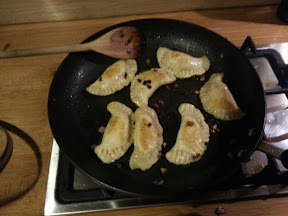 They go really crispy and really are amazing.

However, to say these are such a simple food, they do take a while to make, but they really were worth it.

Ideally you should serve them with a bit of butter or olive oil drizzled over and a sour cream dip. 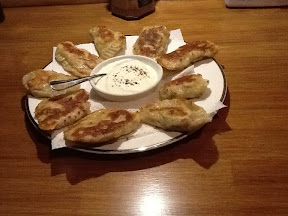