- January 06, 2013
I was up really early today as Rob was due to comearound 8ish to finish of the kitchen, so I wanted to sheet up the carpets and floors and take things off surfaces and out of the cabinet that he's going to put the drawers in.

I'll be so glad when the gunnels inside are done with the new oak pieces he's sourced. The ones in here at the minute just look such a mess!

Anyway, he text me at the time he was due to arrive to say he couldn't make it! Grrrr. I wasn't happy after sheeting everywhere up but he is coming tomorrow instead so its not really a big deal.
I needed to be up early anyway as I also had my MRI scan today which wasn't a nice experience at all! Its probably a good job he didn't come as it meant I could just come home after the scan and rest rather than having to clean shit loads of mess up!

A lot of people say its being enclosed in the machine that's the worst part of an MRI, but that didn't bother me - it was being able to feel vibrations coming from within my body whilst in the machine that was weird! I cant really explain it! At least its done now though.

Whilst in the engine room the other day when the batteries were being topped up I freaked out at a sight near the weed hatch... 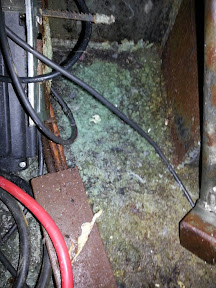 At first I freaked out as I thought it was something mouldy!? It looks really disgusting. However, its not mould or something that's died and is rotting... It's like hard crystals and I'm not sure what it is or where it's from!?

I wonder if these crystals are worth anything!? Could I sell them and make a fortune!? Could I be the next " Waterford Crystal" company!

Seriously though its a little bit concerning. I'm guessing it could be something from the hydrogen gas that's released from the wet batteries when they're being charged as its at the back of the battery bank, but I can't find anything definitive on the web!
It must be a reaction of some kind from something.

Perhaps a more experienced boatie will be along shortly to tell me!

We really need to focus on getting the engine room sorted this year. It's in a right mess with being pretty much neglected all winter. Needs a good scrape back, primed and painted properly. We also need to get some storage in there sorted as there's stuff everywhere!