We ideally wanted to move the boat to the Disley area just for a change but we are having Rob back on Sunday to finish off the gunnels and fit a chest of drawers in the kitchen, so we really need to stay put for now.

We popped into town late morning to do a bit of stocking up of on food at Waitrose, although we didn't go too mad as P is flying back home tomorrow for a few days so it will just be me and Eddie on the boat until Tuesday.

We had a quick lunch in town too as we didn't want anything big as we were heading to the The Rams Head in Disley for dinner at 5PM.

We thought it would be a good idea to go for dinner before P heads back to Poland tomorrow, plus I've been pretty much boat-bound since being ill with my knee (which has been really bad today and even feeling pain in my left knee now as well!) so we thought it'd cheer me up too!

Anyway, we set off to our local train station about 4PM. Disley is only one station down from us so you're only on the train for about 5 minutes. Here's a pic of a bit of scenery on our walk down to the station - it's really nice 'round here :) 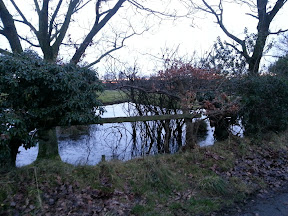 Anyway, we got to Disley about 5 minutes later on the train and the Rams Head is only a 3 or 4 minute walk from the station. 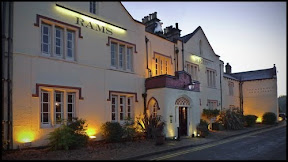 We walked through the pub doors and were massively disappointed! There wasn't a staff member to be found! Other customers who were waiting to pay bills or order food were walking around trying to find staff too. We thought we'd leave as we'd both never seen anything like it! Had the apocalypse on the 21st December killed off all the staff!?

After walking around Disley though and not finding any other suitable restaurant, we decided to head back and see if maybe the staff had come out of hiding.

We finally got a nice seat by an open fire (can't beat an open fire!) and a couple of menus, got comfy with a bottle of wine and started debating about what the food would be like.... 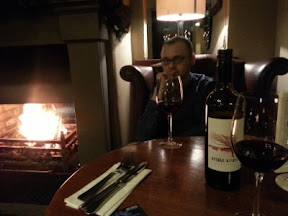 You can see how impressed P is in the pic above....

I'd got it in my head that the food would be horrendous but rather than wasting the journey coming to Disley, we decided to give it a bash...Good ole fashioned fish and chips for me and a marinated half chicken with beans and butternut squash for Pav!
The food was amazing. I nearly didn't get this picture as P had devoured his quicker than me ( which is a first!). The food had left him impressed which takes a lot of doing! 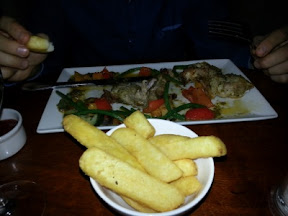 So despite really disappointing service throughout, the food really was nice and we'd recommend the place for the food alone. Just don't expect amazing table service or any interaction with the staff!

We got a taxi back to the boat, as a bottle of wine later and all the food we ate left us feeling a bit pissed and bloated! At least I can't feel any pain in my knees now though, which proves alcohol really is more effective at pain relief than prescription strength ibuprofen!