- January 13, 2013
It's 4PM here and the snow has finally started! It's only very light and dusty at the moment but I'm hoping that it will turn a lot heavier... Although I hope Pawel manages to get home from work!

Here's a pic but I don't think that the iPad camera managed to focus in enough to capture the snowflakes. Oh well! 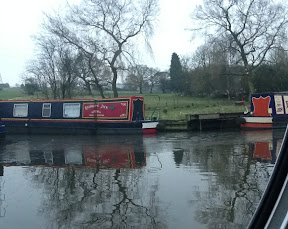 Here's another one showing a bit of snow on the blueberry bush - we really need to get a decent camera. The cameras on Apple products are shit! 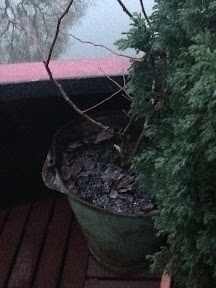 We awoke this morning quite early and Pawel had a look out the window to see if there was any snow but there wasn't. Plenty of ice around and the canal was frozen - again, nothing major but just a thin layer of ice which soon melted by around 11AM.

I was feeling less moody and ill today so we went into town at lunch to grab a bite to eat as we had nothing in the house. Even poor Eddie didnt have any biscuits left! So a food shop was on the cards too. I also needed to find a solution to refit the Perspex glazing on the new hatch so needed to visit the DIY store.

This is what I've come up with: 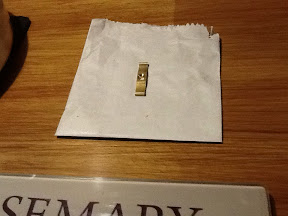 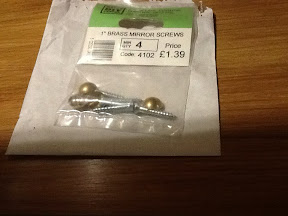 The top picture shows some "clasps" which I'll put on the hatch frame at the top to hold the Perspex. You can just rotate it around to take the perspective out then. Ideally, it would be a good idea to have these made out of some offcuts of sapeli so its less detracting from the beautiful woodwork Rob did for us.

Normally with these mirror screws, you put the screws through the hole of your mirror and then screw the caps in to tighten it up to your wall and finish it off nicely. We don't have holes in the Perspex and don't want them, as it would mean unscrewing the whole thing every time we want to open the hatch.


This is easier too, as its adaptable if we do decide to get a piece of glazing to replace the Perspex (which keeps getting scratched!)

I keep meaning to order some glass, perhaps having some sort of stained glass design commissioned, but funds are quite limited at the minute, so that will now wait until summer time probably.

We've still not returned to our own mooring space after Rob coming last Friday and I'm not sure if we'll get back up there now with the weather deteriorating. If the canal freezes over tonight and its bad tomorrow then we'll just stay put. We'll see how it goes.

At least tomorrow I'll be able to have the hatch open and see the snow through the Perspex glazing :D

Nothing else to report - I'll make some dinner later and watch Dancing on Ice. We gave the stove a much needed clean out this morning so that's burning better now, so at least we'll be keeping nice and toasty!