- January 14, 2013
We woke up this morning and had our first snow blanket! It was white everywhere but the snow then turned to rain and then back to heavy snow again! 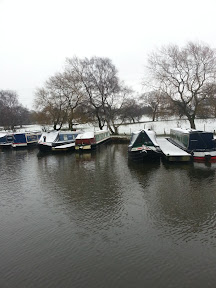 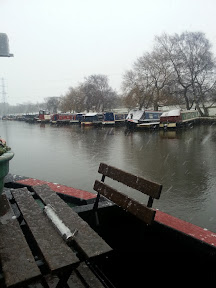 After lunch it finally stopped and even the sun poked its head out. Temperatures aren't too bad either right now, and now at 6PM, the temp is showing 1.4degrees. All the snow has gone a bit mushy now as well. Not sure if the temperatures will drop to minus 5 overnight as predicted...

We were woken last night at around 2:45AM by kids in cars in the visitor car park where we've been moored since Rob came on Friday to do the hatch for us. It all sounded good natured with the lads just messing around, but, call me cruel - I called the police anyway as I didn't want to risk them coming onto the towpath and scratching the boat or climbing onto it or anything. They sounded pissed after all!

The police arrived really quickly, although I'm not sure if the kids were breathylised or anything like that. If I'd been a policeman on duty I definately would have done though. They were way too "hyper" to just be on a drive out at night! Dunno why they weren't in bed ready for either college/school/work at that time on a Sunday/Monday morning.

Aaaah well, shame! I wonder if "mummy and daddy" had to take a day off work because their little darlings were arrested/breathalysed/booked in for a provisional court hearing!?

After that, we quickly went back to sleep, fully satisfied that order had been restored ;)

We decided to move the boat today but not back to our usual moorings but two bridges down and are now moored in a "flash" where the canal is really wide, albeit very shallow on the wider, parts.

Here's the view from the hatch: 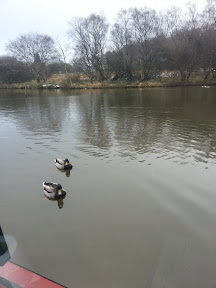 Late yesterday I managed to fit the hardware to the hatch frame to house the Perspex so I've been happy today with my hatch open. Even the ducks came to say hello: 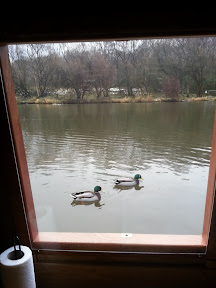 We will probably only stay here a couple of days and then head back to our normal spot. The downside about where we are now is that the towpath is really, really muddy! Not good when you have a dog that likes to misbehave outside... 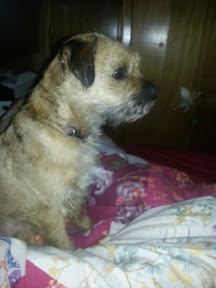 Sitting at the breakfast bar with a view from the porthole: 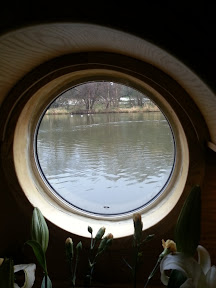 Not much else going on really. Pawel is off work so its dinner followed by my "Chocolate Espresso Goo Pud". They're really easy to make - I've been making them years, so I'll post the recipe for it tomorrow along with the obligatory pictures! You'll love them!