- January 31, 2013
This is going to sound ridiculous, but I'm scared of under the bed. I think I'm scared because I read so many horror stories on Canal World or on other people's blogs about it being a prime place to get 'damp' or for condensation to form under there, and worse of all, the possibility mould could grow there...

Doesn't sound like the ideal "Boudoir" does it?! I'm a bit fussy like that. Can't stand dirty bedrooms, kitchens or bathrooms.(doesn't leave much left does it!?) I basically have OCD.

Anyway, I'm scared that horrible things could happen under my bed!! Sometimes I have sleepless nights thinking about what's under the bed, because I also store tons of shit all my worldly possessions under there which could contribute to condensation/damp/mould/filth/lice or whatever.

Hmmmm. So despite being scared of the bed, I do routinely check it and make sure everything is OK. Today was one of those days.

However, when I lift the mattress off to do a check, my heart starts racing, hands sweating and my pulse increases to about 160 beats per minute! It sounds ridiculous but that really is how it is!

The reason I decided I'd check under it today is because I'd also gone into town early this morning to get some slim plastic storage boxes to put some of my shit possessions into that were otherwise unprotected. I suppose everything should be in plastic storage cases really but it's just one of those things that we've never got round to!

Everything was fine under the bed - no mould, no damp and nothing was wet, although I don't know how this would happen anyway as I made our bedframe and made sure the mattress sits on slats rather than a solid piece of wood to allow circulation etc. So it's something that puzzles me when I hear about people having damp problems under their bed on their boats... How can it get so wet??

I'm rambling now I know! Anyway, pretty much all the stuff under there is now in boxes. I'll need to get one more box for just a few bits and bobs but I'll be happy then that under the bed really is a friendly place and not somewhere to be feared...

So yes, this is about as exciting as my life is at the moment - cleaning!!

Nothing else new really. Oh, I did take this pic last night of Eddie sleeping on me! Check out those teeth!! 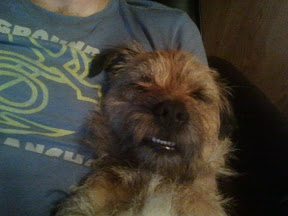 Its been a beautiful day here today though, although the winds have been really strong - they've been throwing the boat around no end. They're supposed to last until the weekend and it's a bit scary when the gusts don't seem to taper off and the boat keeps rocking and rocking!

We've had some sunshine though which has made me feel a bit brighter and looking forward to summer. Here's a pic of the cows on the field outside our boat: 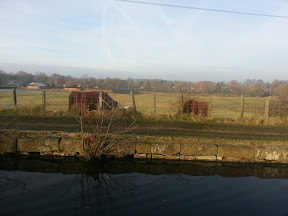 I made a chocolate pudding yesterday - my Chocolate Gooey Espresso Puddings that I posted the recipe to a few weeks back.
Anyway, here's how not to serve it: 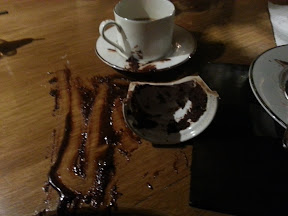 (Hahaha, not funny at the time, but it is now!)

Yep, can you believe it, I took it out of the oven and it flew right out my hand onto the worktop and the ramekin smashed!

After a lot of swearing and shouting I ended up sitting down with a biscuit...! One Thing After Another!