- January 12, 2013
Its only 17:45 as I write this, but I've literally watched the temperature decrease by about 0.1degrees every 10 minutes since around 5PM! Its 1.9 degrees right now. I think tonight will be a cold night!

We woke up this morning about 7, but didn't get up straight away. Around 730 some really strong winds arrived out of nowhere, really blowing the boat around. It was definately the worst winds we've had for a long time!

I finally took some pictures of the new hatch doors and frame that we had done on Friday today. It still needs a few coats of varnish, which was meant to be done today, but I've been feeling more under the weather than normal today.

OK, so here's how the galley is looking now: 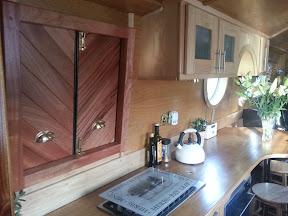 As I said we still need to do a bit of varnishing, that's why the plinths above the worktop, or "gunnels" as I call them, look a bit light/white. Once properly varnished they'll match-in a bit better and then darken a bit more over time. 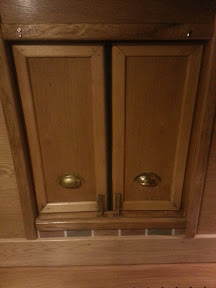 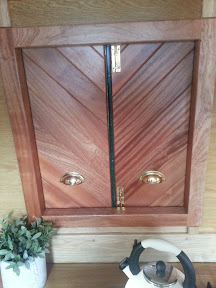 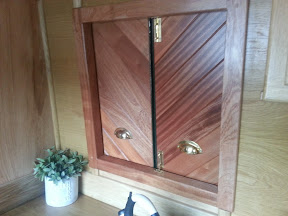 We think it looks a lot better and more modern.

We didn't get up to much today, as I said, I've been feeling under the weather. I've still got problems with my knee which has been really bad today, and also my throat is killing me and I've got a massive mouth ulcer - everything has just got me down today and I've felt irritable all day.

We made a pizza for lunch, making the base from scratch too. We wanted to make it from scratch as we'd got a new pizza tray with holes in the other day that we wanted to test out. It's supposed to make the base more crispy whilst cooking. I think it did the job!

Also, I'm trying to stop buying "ready made" foods and start making more things from scratch. I wasn't really in the mood for it all today though, but made it anyway, for Pawel if nothing else!
We topped the base with humous instead of tomato purée, onion, mushrooms, fried bacon bits and cheese of course! It was really nice and so much different to a shop bought pizza. You could really taste everything - I'll definately make us another one again.

Can't be bothered doing anything else today now and probably won't even bother with any dinner. Too tired and too ill!

I'll take a nap in the recliner with Eddie and make sure the stove is fired up to keep me warm.