- December 31, 2012
We went into the local town the other day as our old DAB radio gave up the ghost and we missed Jazz FM ;) There's an independent electrical store down there which is a bit more expensive than getting it from somewhere like Currys or even online, but I'm fed up of ordering online and having problems with delivery and waiting etc.

Getting it from a shop is much easier - you can look at it, and get it there and then! I think shopping in store is going to make a comeback!

Not really sure why DAB radios are so expensive, but they all are so we thought we'd get the most appropriate one we could for our boating lifestyle.

We found a radio from a brand called Roberts which came with rechargeable batteries which charge when you plug it into mains and also has a built in solar panel - meaning that the radio can function just on solar alone and the panel will also charge the rechargeable batteries in good conditions. Sounds great although I don't suppose the solar panel will be much cop until the spring/ summer arrives.

It'll be great though when were out and about cruising in the warmer months. We'll be able to have it out on the deck with us ;) 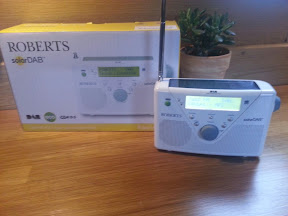 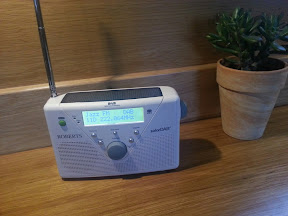 A view of the solar panel - it doesn't state what the wattage is but its quite a big built in panel and apparently can power the radio on its own in good conditions:- 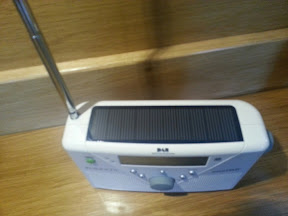 It's got a good stereo sound to it and good bass so it will do for us!

Here's to wishing everyone a HAPPY NEW YEAR! I'm not a fan of it myself, and will be in bed probably long before 12! P is at work but he's off tomorrow and we've decided to actually venture out somewhere new, away from the mooring. We're not going far, maybe just down Derbyshire way but it'll give us a change of scenery as we've been here at the mooring since August time.
We will top up with water before we go, and we got coal and diesel today. I later went to Waitrose to stock up on food which should last a good week or so.

I'm looking forward to it :)