- December 02, 2012
Well we've had some freezing temperatures here over the last few days. Last night was the coldest though as it was minus 6 when we arrived home at 745PM. We'd both been in work all day but luckily when we arrived back the stove was still alight as I'd set it all on low in the morning before I'd left - it was lovely and toasty inside!!

The previous few nights have ranged from minus 2 to minus 4. Most people hate this sort of weather but I absolutely love it! Its a really magical time of year I think.

Anyway, on Friday we topped up with water which involves moving the boat around a quarter of a mile to the nearest water point. There was only very thin ice in certain places on the canal on friday so it was our first "mini-ice-breaking" session since we bought the boat! Last year we were in a marina with no where to go so didn't get to go ice cracking! I'm hoping they'll be more opportunities this year. I think Eddie enjoyed it too... You can't really see the ice in these pics (well, I did say it was really thin!) 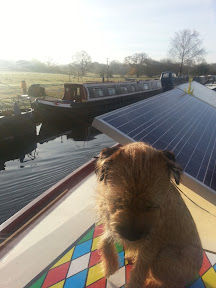 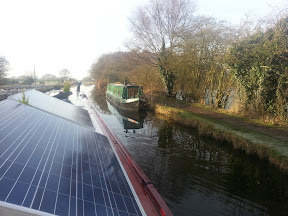 I don't think the geese were happy! 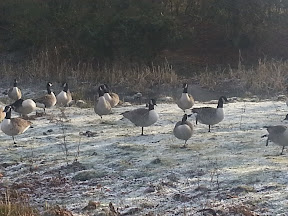 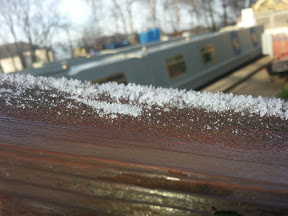 Anyway, i was glad we topped up with water on friday as the canal is frozen again today and its a bit thicket than friday and saturday. If we have a few more days of this, we're not going to be going anywhere for a while!

After the water on Friday, we debated about getting an Ecofan from our local chandlery. The stove is great at keeping us warm, but takes a while to feel the heat at your feet. The Eco fan is just a fan which sits on top of the stove and uses the heat from the stove to start spinning, thereby circulating the air so you don't get hot and cold spots of air.

Here's a picture of a few of them in action: 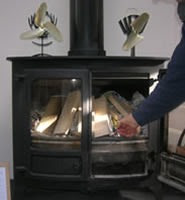 Anyway, I'd LOVE one but funds are a bit short at the minute as they're around £100! Maybe Santa will bring me one?!
Later on Friday we put our Christmas tree up as it was one of the few evenings me and P have together to do it. 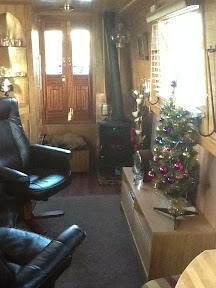 We just went for a small one this year with battery operated lights seeing as we're not on shoreline this year. It's really nice though. It looks a bit tilted in the pic but not in reality!?

We had our curtains hand delivered on Friday as well for the new doors, but they were all wrong! The lady had made them too big and you can't draw them back as there's too much material and its too thick!

She's going to pick them up and basically cut each curtain in half ( way, way, way too much material lol) and also make them a bit longer as for some reason they were shorter than what we agreed on. This was a bit disappointing, especially as she'd had our pole to test them on too. Putting them on the pole and testing them would have shown her straight away they were too big. Never mind! Things happen and I'm sure we will have them sorted out by next week.

I'll be booking a doctors appointment next week too as I seem to be having problems with my knees! They've been achy for a few months now especially going upstairs or lifting, but last night one had really swollen up and I'm really struggling with it :( it's also clicking quite a bit and feels like its burning inside. Not a good thing to be happening when I work on my feet all day too.

Ill be resting it for today and tomorrow and see how I am on Tuesday!