The Final Day in Sanity

- December 18, 2012
I've not posted in a few days, partly because I've been feeling a bit under the weather and also because I've been busy arranging things for the final kitchen modifications which are taking place....oh....tomorrow!!

I feel a bit stressed about it as this is going to be slightly more invasive than the Welsh dresser style cupboard we had fitted the other week, as it involves a lot more work on the boat itself rather than a cupboard being built in someone's workshop and then just fitted in situ.

This time there's cupboards being taken out, cupboards added in, worktop changes.... and we're getting new gunnel trims from the kitchen end of the boat to the saloon end as the ones currently leave a gap between the work top and the wall above and generally look tatty. We attempted to "tile" over the gunnel to hide the gap with some tile transfer stickers but these have started peeling away and basically look a mess!

I'll detail more in tomorrow's post, but basically from tomorrow until Friday things are going to be manic on the boat and there's going to be a HUGE mess everywhere. Dreading it in a way but I know Rob is good so it will look amazing in the end. It's just so much going on just before Christmas.

I decided to make my own ice cream again yesterday as I made it a few weeks back ( maybe a few months now!?) and it was amazing and really simple to make.

This is a recipe using blackberries, which, when I first made it back in October, I'd picked from the many blackberry bushes from around here. This time, I've had to buy the blackberries!
The great thing about this recipe is that with most ice cream recipes you have to "churn" the mixture every hour or so to stop ice crystals forming. I'm guessing in this recipe that its the condensed milk that stops this from happening somehow although I'm no scientist! Easy and simple to make, this the best ice cream you will have....I guarantee it!

* 600ml of double cream
* One of the small tins of condensed milk
* A one pint jug full of fresh or frozen blackberries
* A good fistful of white chocolate chips ( don't bother
measuring, you can't go wrong with this!)
* A dash of vanilla flavouring
* 5 tablespoons of icing sugar 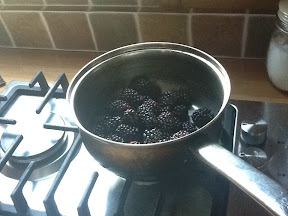 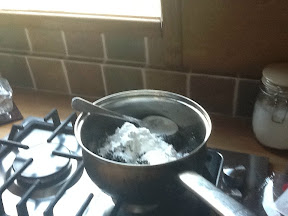 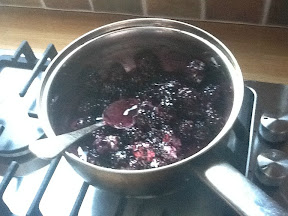 2. Put the blackberry mixture through a sieve to remove all the seeds and any fleshy bits from the blackberries. You want the "ripple" to be a slick glossy sauce. Collect the juice in a bowl underneath the sieve. 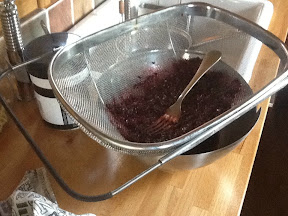 3. Empty the double cream and condensed milk into a bowl and whisk with an electric whisk until it goes thick. You don't want it to go fully whipped, just thick and just enough so that the peaks will hold their shape. 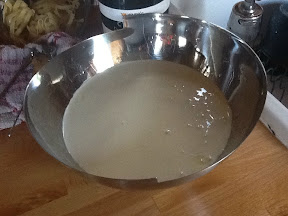 4. In a 1litre, or better still, 1.5 litre tub with a lid, literally dollop spoonfuls of the cream mixture, white chocolate chips and blackberry sauce, swirling the sauce around so it 'ripples' and keep alternating until you've used all your ingredients 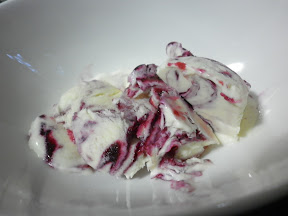 I really want to try and make an espresso version of this soon as well, I just don't know how I would make the coffee sauce yet!
Maybe after Christmas now.

I'll keep you posted about how life turns into insanity tomorrow!