I know I've not posted for a while but the Internet has been down for the last few days. I don't know why, but it is a mobile broadband connection and these days, rather than getting angry at it and wanting to throw the iPad into the canal I just turn it off and enjoy the TV, the crisp weather outside and keep busy with general jobs on the boat that I need to get on with!

So basically, our Internet connection is temperamental and can go "off" for days at a time! I'm guessing it is because its mobile and because we're on a boat in the middle of nowhere!?

I've been quite busy anyway the last few days so wouldn't have been able to post so much. Saturday I was at work all day and then it was my work Xmas party which we had at a Thai restaurant in Manchester city centre. There was only four of us for the meal which was really nice ( and all paid for !) and then I had to get the last train home whilst the others went out for a night on the town!

Sunday came and we had Rob Shone come over to fit the new kitchen wall cupboard for us which is a nice "welsh dresser" style cupboard over the porthole in the kitchen.

I've been looking forward to this piece of carpentry for a long, long time and it was meant to be done at the same time as the other cupboards/doors we had fitted by Bourne Boats at the end of October....

Anyway, a picture is worth a thousand words, so here's the before and after: 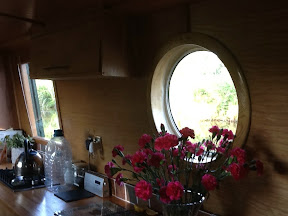 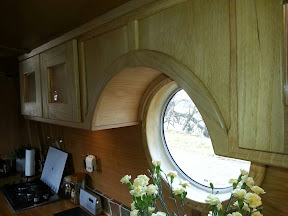 With the lights on from the other side: 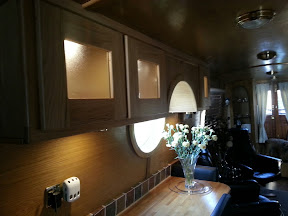 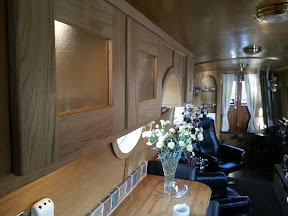 It really looks more amazing in reality than in these pictures and Rob has done an amazing job. This was hand built by Rob and he definately has an amazing talent. I wish I could build something as magnificent as this.

I'll have to get a picture taken with the lights on at night so you can get the full effect!

It's nice to have the LED lights inside this cupboard and underneath downlighting onto the worktop below, as it gives us more light (obviously). They are also LEDs which use a lot less energy, meaning we can have the lights on at night and it doesn't effect our battery bank as much as normal lights (like the ceiling lights). The plan is to change all bulbs eventually to LEDs just because one of our ceiling lights uses the same amount of energy of 10 LED lights.

These new cupboards with lights in also create some "mood lighting" within the boat creating a cosy environment.

Future plans with Rob are some kitchen modifications which are to be done in the next few weeks and the bathroom to be tiled when funds allow, probably in the new year now....

All this work is modification of things we've done ourselves as a stop gap and are now having the time and funds to re-do properly with a professional (as we've made an abortion of certain things!)


On Sunday, we also had the curtains delivered back to us by Carole... they're looking much better now too and give some privacy from the glazed doors. You can see them in the pictures above too. (Just!)

Everything is coming together!

We woke up this morning and the temperature outside was minus 7!! Despite the fact that stove was still going with the air flows shut down it was a little chilly in the back cabin. I think tonight I'll be leaving the air vents open so that the stove burns at full capacity all night. Ill just really load it up with coal and that should do the trick as apparently tonight will be even colder than last night. The canal is already frozen solid tonight and has been all day. We smashed some of the ice today in the canal and it was over half an inch thick. I don't think we'll be topping up with water on Friday unless there's a big thaw!

Don't get me wrong, I LOVE this weather!!! The colder the better! I really hope we have snow for Xmas and temperatures drop to all time lows!! I love it when everywhere is frozen....it's less messier too when you have a dog to walk in the country when all the mud is frozen solid!

What do you think Eddie? 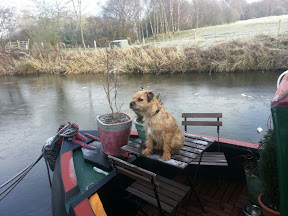 Hmmm, think that says all!

A mince pie is warming in the oven and a coffee is waiting for me, so I'm going to head off now! The stove is roaring, the tealights are lit and there's a film about to begin on TV, so that's me done for the night!