- December 03, 2012
This morning was another chilly start at minus 6 again! I got up with Pawel again and headed out at 630PM to take him to his work taxi and to give Edward a quick run about. I took a couple of pictures and then a few more as it was getting lighter.... Lovely morning 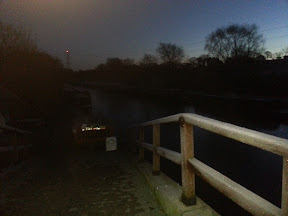 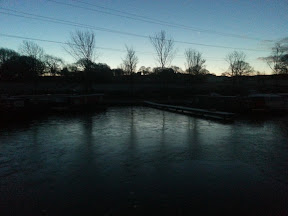 View out of the porthole: 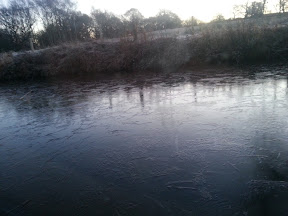 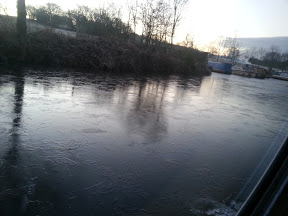 The view out of the front doors and a frosted covered table! 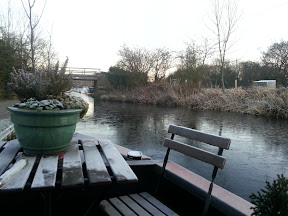 Nothing else has happened really although a theft has occurred!

I had the engine running this morning and after around an hour and just as i returned from a walk with Eddie, the engine started "hunting" (the rev speed going faster and slower all on its own)

I really started panicking as I assumed it was something serious ( we really don't know much about engines!!!) and we've had so much expense recently with renovations and battery problems (!) it's something we could do without .

Normally, I would have checked the fuel level as we did something similar like this last year where we let the fuel tank run dry(!) but I remembered we'd only put 40 litres in the tank about 6 days ago...

Hmm... I started reviewing the Beta 38 manual and panicking at all the possibilities that could be wrong with the engine...

I called our engine expert, Ed, who looked at our batteries the other week. By this point the engine was slowing down and then cutting out completely. I turned the engine to ignition whilst Ed was on the phone and it was just cranking / turning over and not starting.

He suggested this was definately a fuel problem and asked if I'd checked fuel levels. I told him no, as we only topped up a few days ago and that usually lasts us ages. He advised that I check anyway.... So I did....

...There was less than an inch on a stick I put into the tank.... I called Ed back to tell him I felt really stupid, but he told me the reason he asked me to check is because he's been doing some work on another boat around here and they've had diesel stolen from their tank!!

Thieving b@stard whoever you are!!!!

I went to the chandlery to get a quick 20l of diesel as I had to dash out on the next train shortly after, and the chandlery would have been closed on my return. Anyway, Andy at the chandlery also told me I'm about the 3rd person this week who's mentioned fuel theft so something is definately going on!

Whoever you are, you are truly scum! And I pray and hope that someone is going to catch you out at your game. Who knows?! Maybe you'll get a sugar and diesel mix out of someone's tank as a booby trap and you'll f*** your engine up! Twat!

Sorry, but I'm really angry. I estimate that someone has stolen around £40-60 of diesel from us. Which isn't a lot but its not the point. Apparently the same scum had emptied a full tank from someone!

I'm just glad we didn't have a full tank. That would have been around £150 worth! The cap will be fitted extra tight in future and only accessible by opening it with a spanner which will be more difficult for a thief to do.

I have to admit though, I was relieved when I found out it was ONLY a fuel problem!

One Thing After Another as always!!

Off to eat a ready made curry from Waitrose with P now and sit in front of the telly box with the fire going and plenty of tealights -cosy night in. It's turned quite miserable outside now and i can hear the rain pummelling on the roof even over the TV. Won't be long in bed either tonight...