- December 07, 2012
Well, me and P have both been off work today, so we've been doing a few jobs around the house (boat!), one of which was to top up with water. We're getting into the habit of doing it weekly now despite the fact that our tank usually lasts us, maybe 3-3 and a half weeks usually. The main reason for this is if the canal freezes over like it has been doing, but then gets worse and worse we won't have water after 3 weeks!

Apparently, last year, everyone up here was frozen in for 6-8 weeks which would be a real problem if it happens this year. Not only that but last year was quite a mild winter and the forecasts for this year aren't so positive!

After doing that, we popped in to Andy at the Trading Post to finally buy our Ecofan. It is expensive, but we figured its definately worth it. I was talking about it a week or two ago on here.

Basically, it helps circulate the air from the stove so you get a more even distribution of heat from it rather than hot and cold pockets (heat rises after all!)

Despite it being only about 1 degree out this morning, we decided to sit outside at Andy's for a bubbly hot chocolate and make the most of the sunshine. Despite it being cold, it was quite nice. We got some coal, kindling and firelighters too whilst we were there and then took the boat back to the mooring where we ripped open the Ecofan!

Anyway, we are a bit sad(!), so this was a bit of an exciting time for us. Here's P unable to contain his excitement at an early Christmas present!! 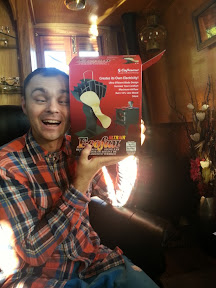 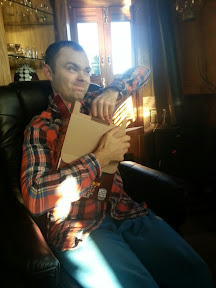 And the Ecofan out of its box finally, and then another showing it in action on the stove (sorry, bit blurry) 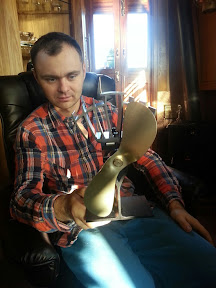 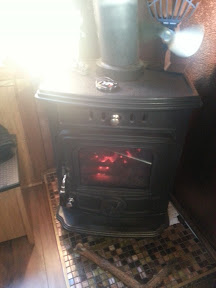 So we're quite happy today and excited about seeing if we'll have warm feet quicker than normal!

We're just in a coffee shop in town now as I write this so better head off as we need to do a bit of shopping and head to the post office and DIY store for some bits.