It's basically a whole kitchen remodel!

We were up yesterday at 7AM as Rob was due by 8AM and he was spot on time as always!

We'd emptied the cupboards and moved everything out of the way and put plastic sheeting down in the saloon on the carpet. I hate it when the boat is in bits like that.

We helped Rob get the worktop onto the boat and then left him to it! We thought it was best if we were out the way so we went into town for breakfast and some last minute Christmas shopping.

My phone rang at 1230 and it was Rob explaining that he was pretty much finished so we headed back to see what had been done and what the damage was!

I was actually dreading going back as I wasn't sure if in the end I was going to like the new kitchen layout... We got back and I was stunned. It looked amazing!! It finally looks like a "designed" kitchen rather than just worktops and cupboards that are just there to function.

Here's a before and after: 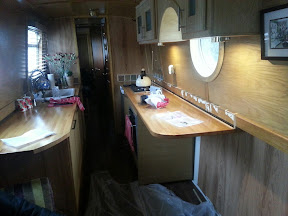 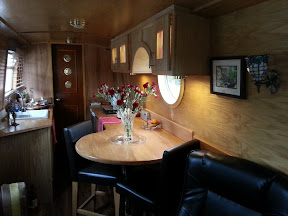 The picture doesn't really do it justice. The big "bubble" on the end gives us more than enough space to sit and have meals and we could even probably get 4 people around it at a push if we needed to, which is nice to have the option to do - it means we can have people over for dinner.

It's still not all finished off either! We are having a little chest of drawers made by Rob for the short side of the kitchen ( left hand side in the above pictures). He hadn't had time to make the drawers but has fashioned a cupboard unit ready for the drawers so we can at least put bits and bobs in for the time being.

At the moment, the new gunnels he's put in end at the kitchen, but he'll be following those through into the saloon so they all match (you can see the join of the two different gunnels at the end of the "bubble" in the pic above if you look closely!)

We were really impressed with the work and how quickly he'd done it all but had lots of cleaning up to do and I also wanted to get a start on varnishing the new top and the gunnels etc.

We realised we had to go back into town to accomplish some of the DIY but then had a call from Ed Shiers about some cigarette plug sockets and wire we'd asked him to get, so that we can wire in a new small inverter just for the TV, Internet dongle and aerial. We still have our battery problem you see and a lot of it is caused by our inverter which converts 12v into 240v, using too many amps from the batteries. It's basically using 3.5 amps just by being switched on - that's before we start using any appliances, which is too much!

So we bought this small inverter earlier this week: 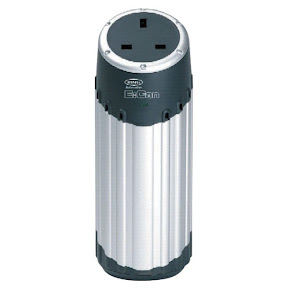 It's obviously designed for a car and to fit in the drinks tray but we'll just have it on the TV unit. It's quite a smart little thing!
Anyway, with everything else that had been going on yesterday, after Ed had dropped all the stuff off for us, Pawel decided to just get on with it and feed the wires through the whole boat to the battery bank and wire it all in....

I was varnishing, sanding, putting things away and cleaning up and he was doing that... We were finally done with everything by 9PM, absolutely knackered and sat down to a nice dinner I'd made at the new "bubble" breakfast bar!

Ugh.... We didn't even move this morning until around 11AM - we were so tired. The new worktop still needs another coat of varnish on but I'll do that tonight and then the whole thing is finished then!

Tomorrow I'll be getting on with feeling a bit more in the Christmas mood by preparing some of the food we will be eating!

We actually did all our Xmas food shopping on Thursday so no last minute rushing around for us! Tomorrow I'm gong to make my chilli jam which is great with meats and cheeses.