- October 22, 2014
Yesterday was our final day in Dunham Massey before we had to head back and the day started at 5:30AM! I woke up first at that time to the sound of heavy rain and the side of the boat "crunching" against the towpath - usually a sign that the ropes aren't tight enough.

Anyway, after waking-up fully, I could heard the sound of strong wind (it wasn't Pav!) but like it was high above, rather than affecting us directly. Things soon progressed and before we knew it, the boat was moving around like a really turbulent plane flight!

That made the crunching/banging even worse so we had no choice but to head outside to re-tie the boat. We decided to cut the ropes completely and move the boat forward along the towpath a little bit as there was more of a bank there for us to gain a bit of protection from - the wind was horrendous! Seriously eery too as we were the only ones moored there and it was absolutely pitch black, with the high-pitched whistle of the wind made only more noticeable by the solitary surroundings.

Not only that but the mooring at Dunham Massey is quite high up and you're totally exposed on both sides - completely vulnerable. The blowing of the trees in the distance and the open, dark landscape made it a scary yet exciting experience.

We took everything off the roof, and all the plant pots off the gas locker and deck and just put them on the deck floor, went back inside and tried to get a bit more shut-eye! We awoke again just after 9 and it was still the same - the boat rocking about and the wind horrendous. 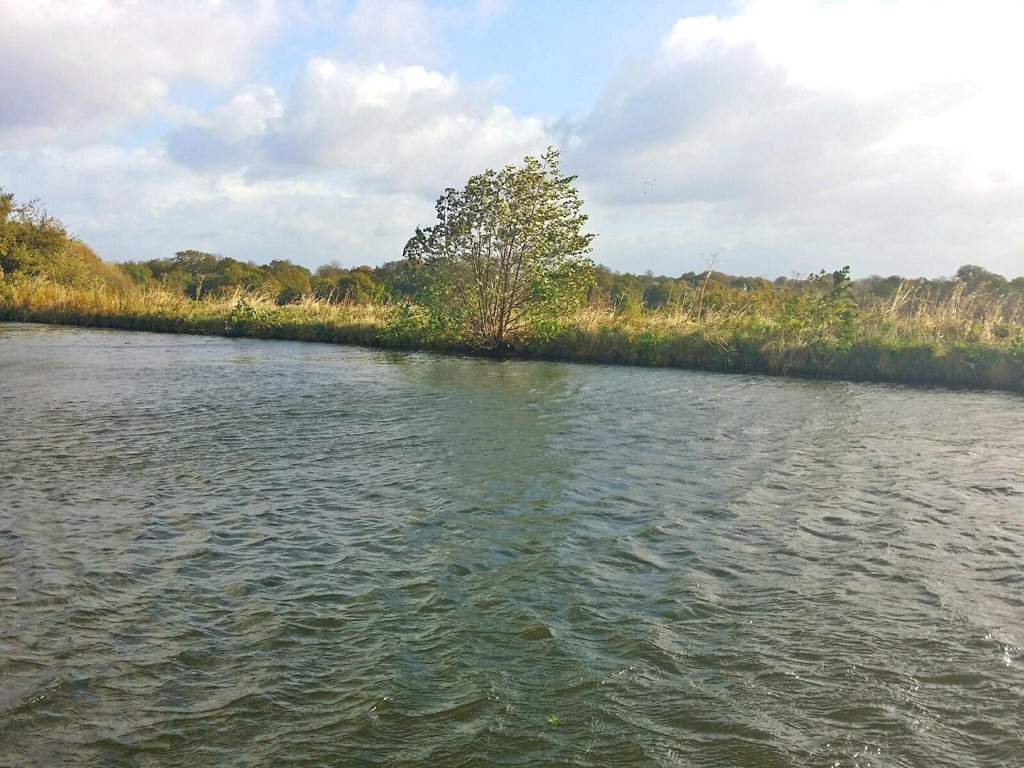 To be fair, at this time there was a bit of sunshine! 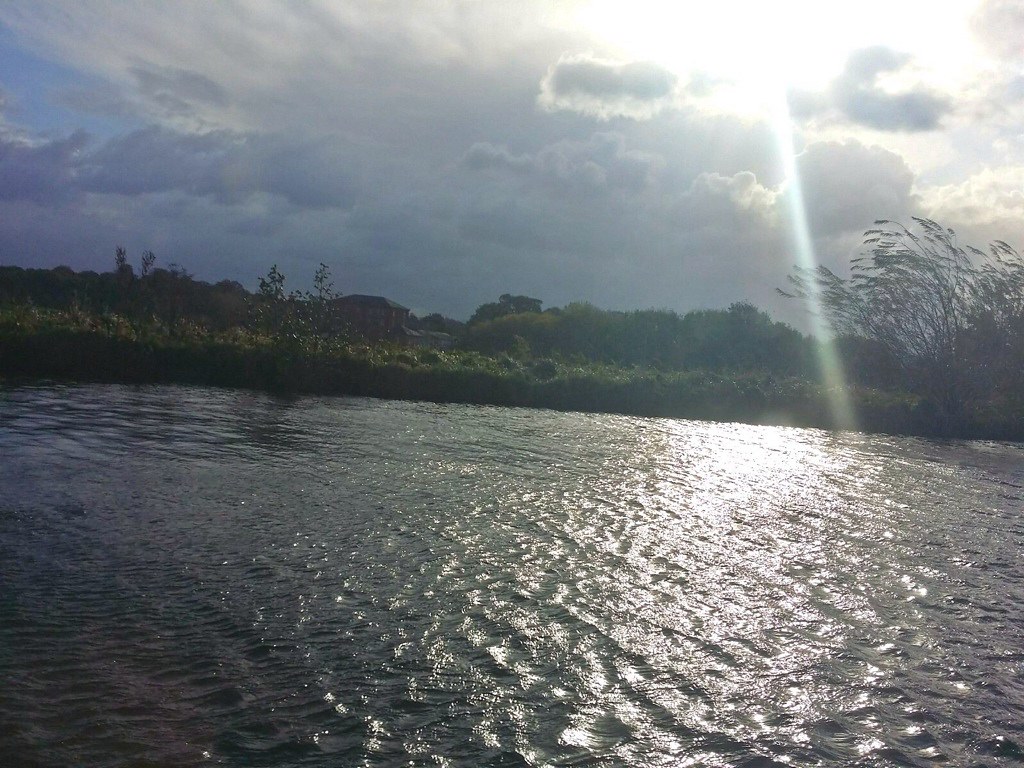 The rain set in later on and we had everything else inbetween - mist, hailstones, even thunder and lightening! So it was definitely an indoor day - even Eddie didn't want to head out.

It was great to have a day to ourselves like that though, just watching TV, eating and generally doing nothing with a bit of turbulence for onboard entertainment!

Everything finally calmed down about 10:30 last night.... The calm before the storm I suppose....

We left Dunham Massey this morning just after 9 and it was perfectly calm and sunny. But as usual in our life, it wasn't long before disaster struck! We noticed that the engine suddenly started vibrating really badly and the engine room was suddenly filled with black smoke! We already knew that one mounting bracket had broken as we had arrived in Dunham Massey on Sunday so thought it was something to do with that.

We moored up quickly and switched off, lifting the engine room floor up to take a look... Nothing obvious as such, but we did notice that the whole engine had moved forward about 2 inches.

We weren't far from Stretford Marine so pulled the boat to them to see if they could help. We had a look again while waiting for someone to come and take a look at the engine for us and discovered that the 3 other mounting brackets had snapped!

The engine is totally disconnected from the base plate and could haves snapped the prop shaft and god knows what else - that would have meant water just pouring in and then we'd have sank!

Engine mount - the circular bolt thing next to the red wires: 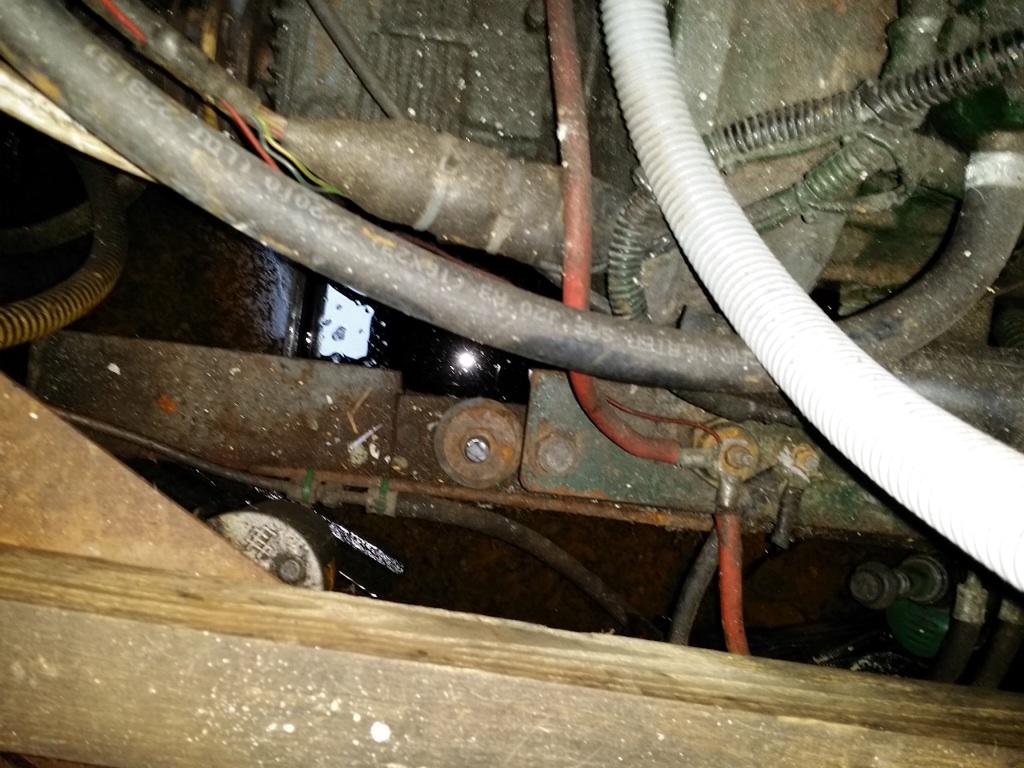 Luckily we were that close to Stretford Marine, who have been brilliant and let us stay overnight, as well as call round all manner of people to try and get it sorted for us. Malcolm really helped as did a guy called Dave who is on the marina.

Between them, they have arranged for a guy from RCR to come to look tomorrow morning, but it won't be sorted until the coming days - and at what expense i can only dread... I know the mounting brackets are around £40 quid each and we need four! 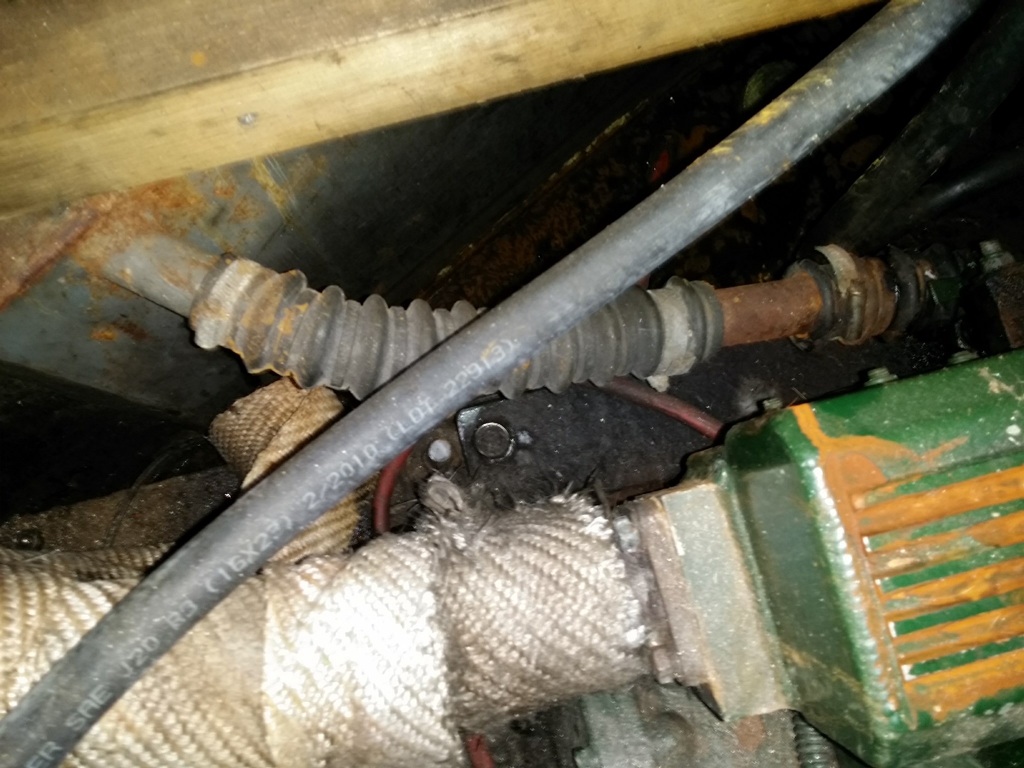 The only good news is that we didn't do any further damage by the looks of it and at the end of the day, it's only the engine mounts. The engine room and bilge looks like a bomb has hit it as a lot of excess water did come in and there's dust and crap everywhere after having to lift all the boards and crap we keep in there.

I can't do any battery charging but Stretford have provided shoreline during the day time and a gennie incase we need further power in the evening. What happened to our own brand new generator I hear you say??!

THATS PACKED IN AFTER 6 DAYS AND 15HOURS MAX USE!!