- October 16, 2014
I haven't felt like blogging really this week, although that's not entirely true, it's more a case of I've not had much time for it either as I've spent the week arguing with people! There'll be more about that later...

On a positive front, we have finally, FINALLY bought a generator. It's not ideal, lugging it in and out of the engine room but it means we can now use our washing machine! Since we've been away from the mooring for nearly 6 months, we've been wandering the streets with bags and suitcases of washing hunting down launderettes and it was getting depressing! Not only that, but I felt that walking around with socks and dirty tea towels sticking out of the bags was only contributing to the "gypsy central" stereotype boaters get labelled with all the time!

Enough was enough so we bit the bullet and decided to buy a generator. We decided that seeing as we don't always have shoreline it will also double up as an extra security for battery charging and hot water too. You can never have too many options as a boater - be prepared for everything!

Originally we were going to go with an unbranded one I saw on eBay with electric start and remote control for only £375 rated at 2200w.... However, it was one of those things where you thought about it and had a gut feeling something wasn't quite right - generators just aren't that cheap, especially pure sine wave ones which the seller said it was.

In the end, we found a Hyundai branded generator (for nearly double the price mind - but with electric/remote control start) and decided to go with that one as it's a good name and has a 2 year warranty. You also know if you take it into a repair place, they are going to be able to get parts for it! 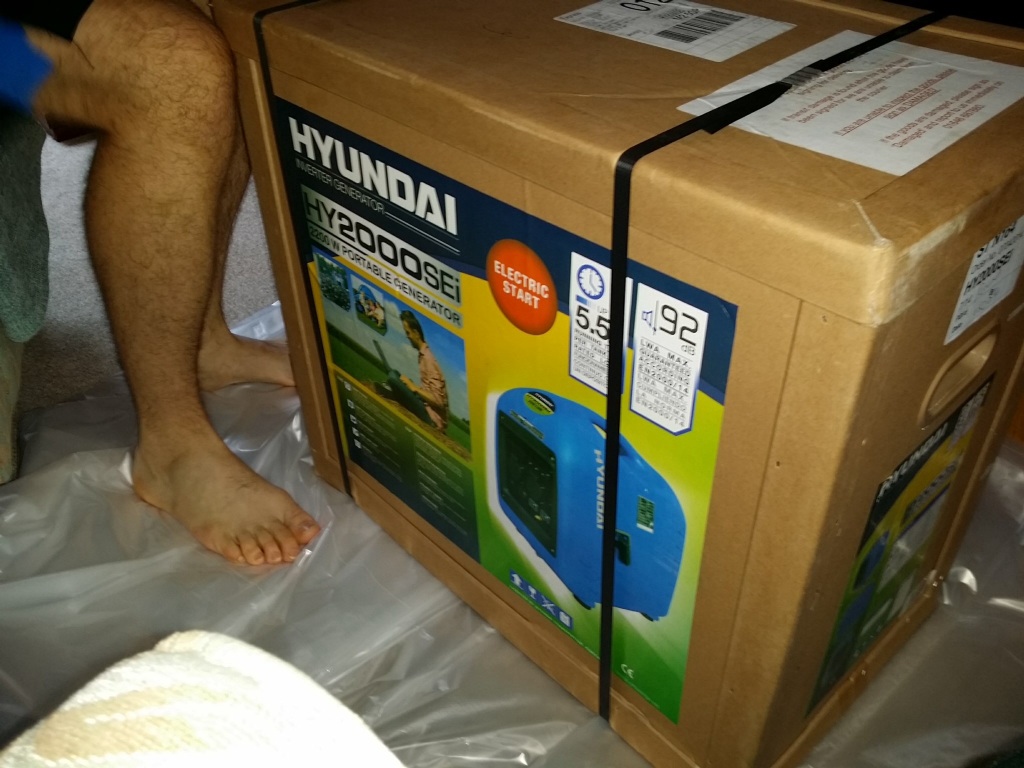 I ordered it on Monday for delivery on Tuesday. I ordered from a company called Tool Net and specifically asked which courier would deliver it and was told UK Mail and paid what I thought was an additional £16.99 for delivery... When a confirmation email came through, despite me paying for the additional delivery charge on the phone they'd charged me £19.99, failing to tell me on the phone that they would also then add VAT on the delivery as well.... So that was the start of "GETTING PISSED OFF" week.

The next blow, was that suddenly it was now being delivered by TNT. I HATE and I mean really hate TNT as they just can't deliver when they're supposed to - they're neither on time, can't provide delivery timeslots, lose things - I've had it all with TNT!

That's why whenever I order anything online I ask which Courier they use - and if they mention TNT, I'll buy elsewhere. I just don't know how they are still in existence, they're that shit!!

Everything delivered is also so much harder when living on a boat and we're using either a business address or Pawel's work address - so TNT is always out of the question as it just causes too many problems!

Anyway, despite me having a massive bust up on the phone with them regarding sneakily adding VAT on a delivery charge and not telling me and then changing couriers, TNT did actually deliver (quite early) on Tuesday morning! Wouldn't use Tool-Net again though in a million years as they don't know shite about customer service.

Anyway, it sounds sad, but we did get quite excited over this as well as quite anxious, knowing if it would power the washing machine or not. We unboxed and topped up with petrol and oil as per the instructions in the manual.

The other reason we went with the Hyundai, is that it came with a lot of accessories, including a shoreline cable (fly lead), engine oil, an oil jug/filler, spare bulbs and battery cables - all these things would have have been an additional cost, as we'd have had to go running around for them before being able to use it. It was much easier just to buy something, a little more expensive, but just be able to use it right out of the box. 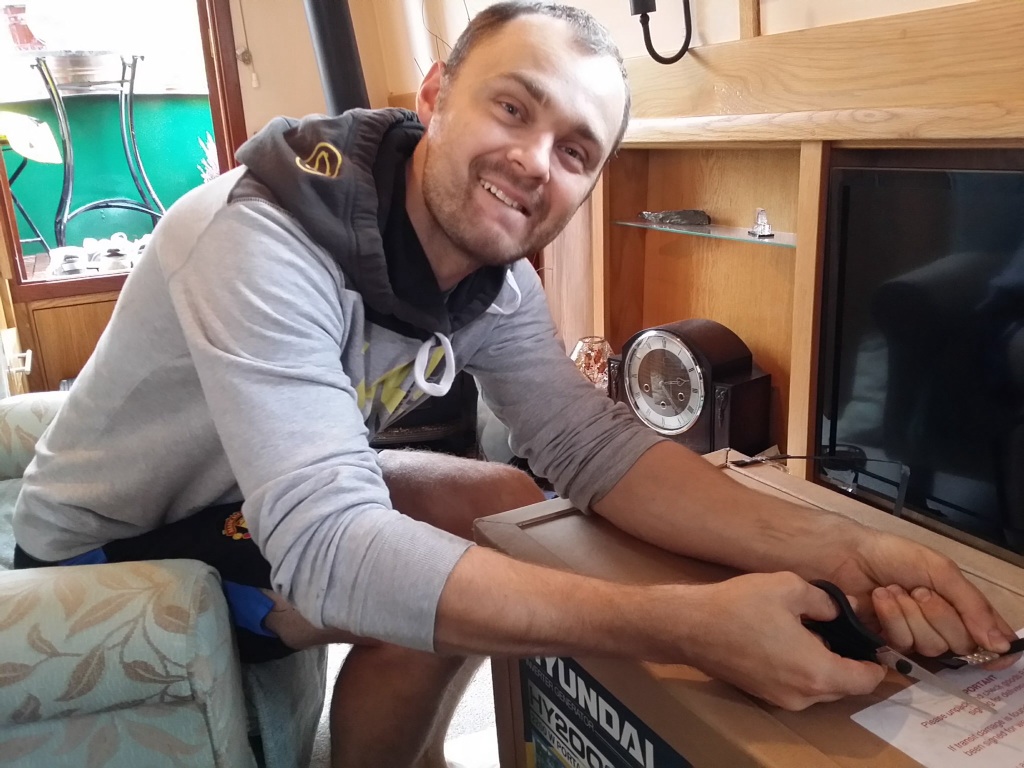 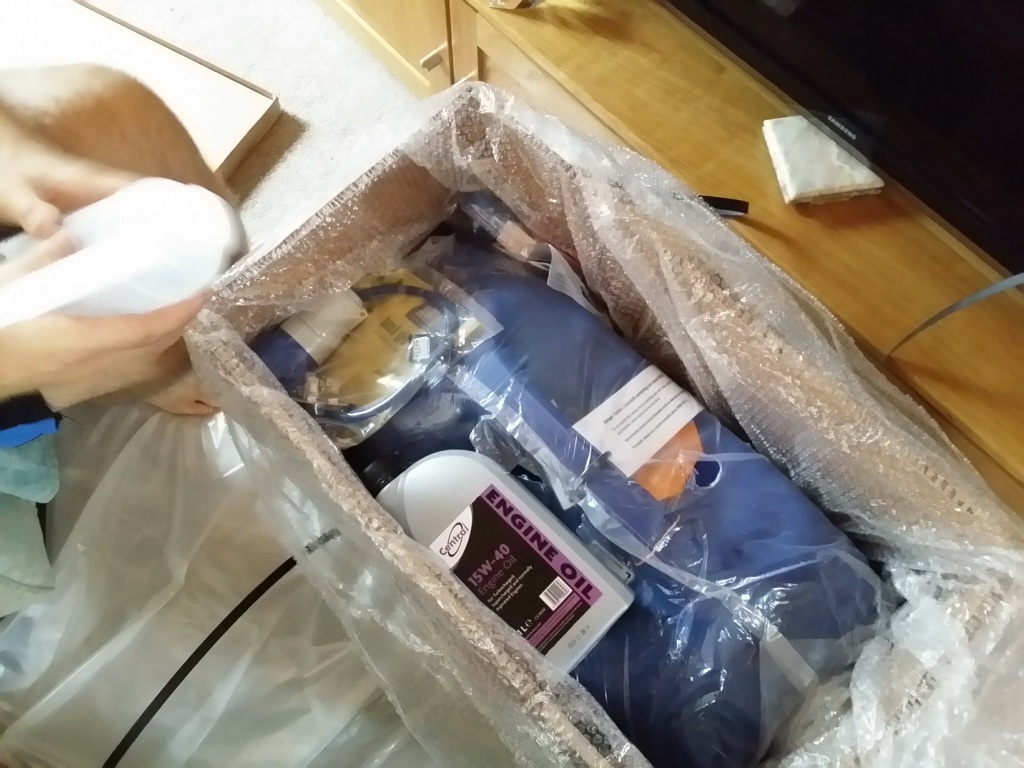 The key fobs, which we were really excited about using, as sad as we are!! 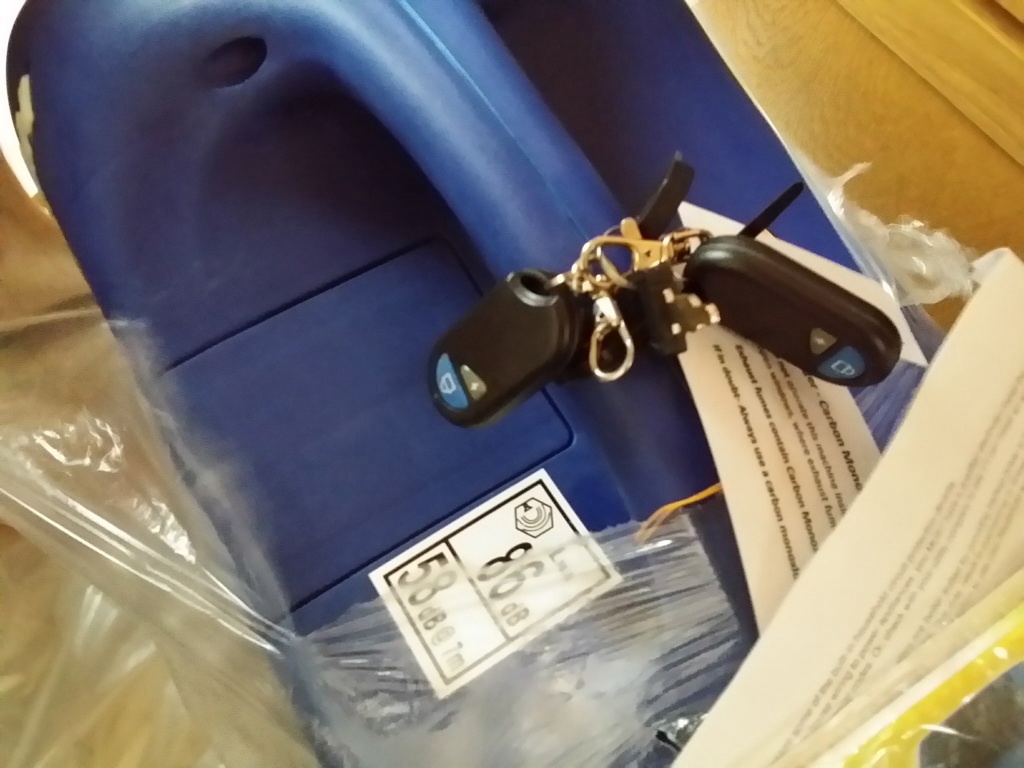 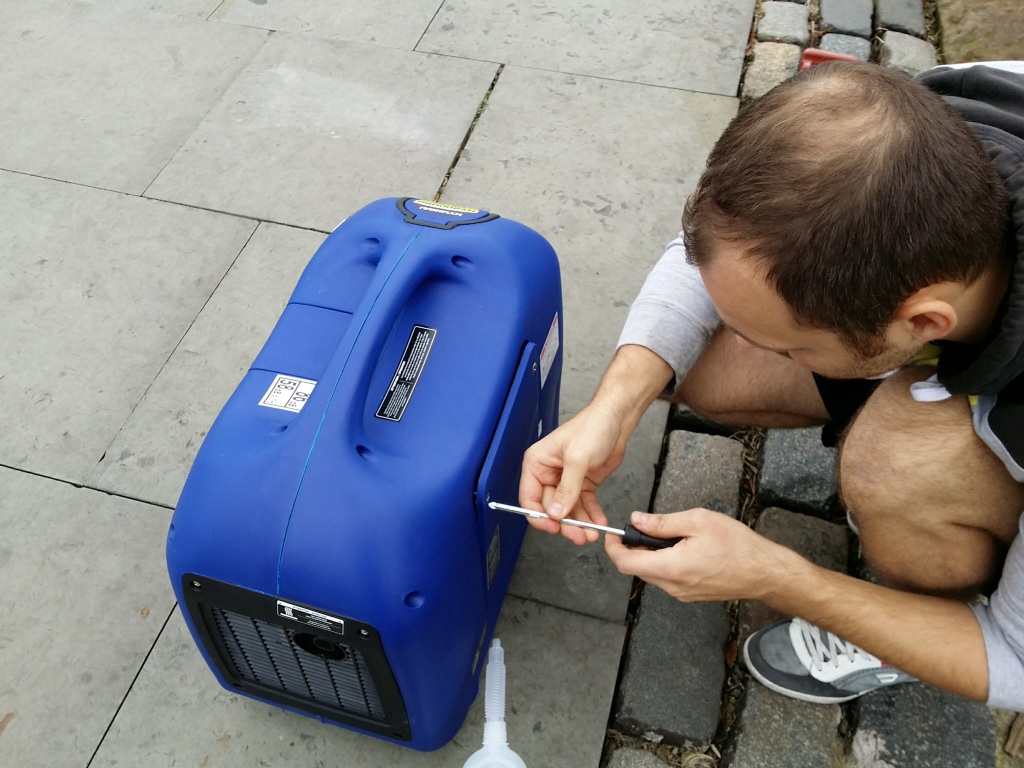 Ready to top up with oil and prime: 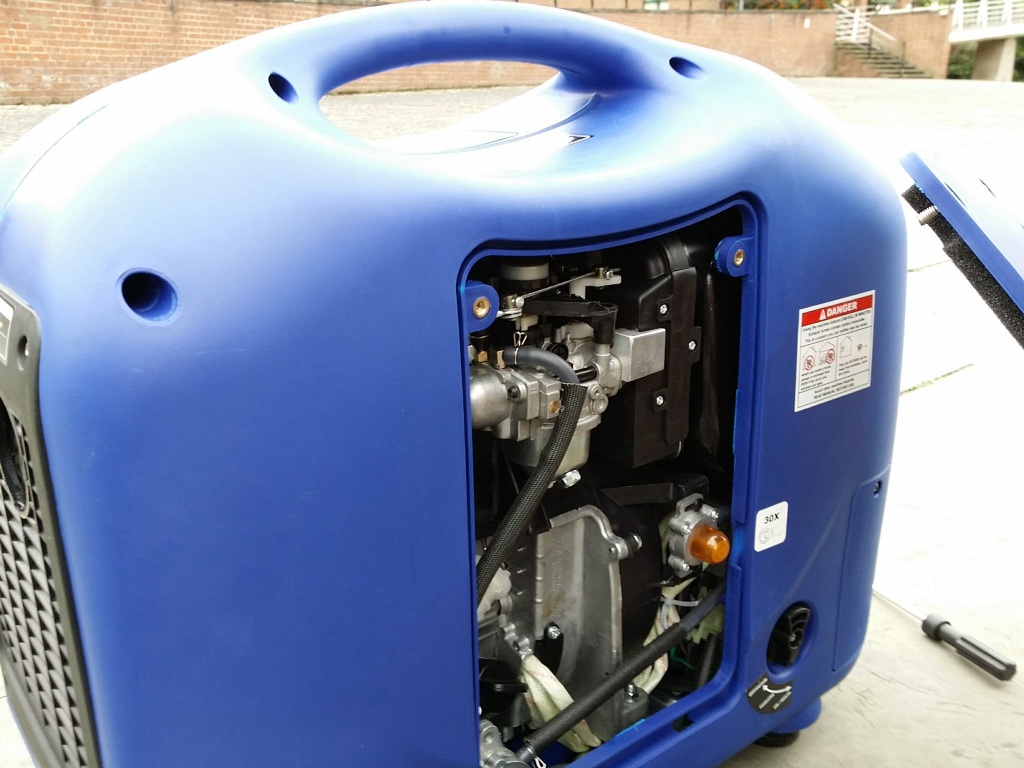 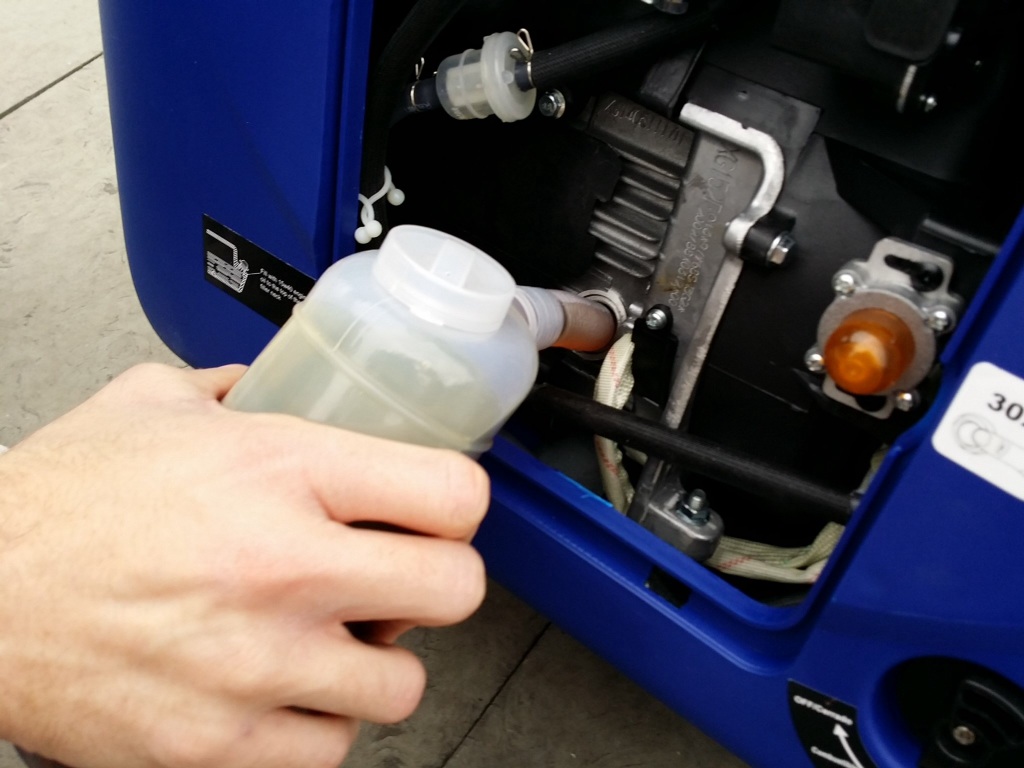 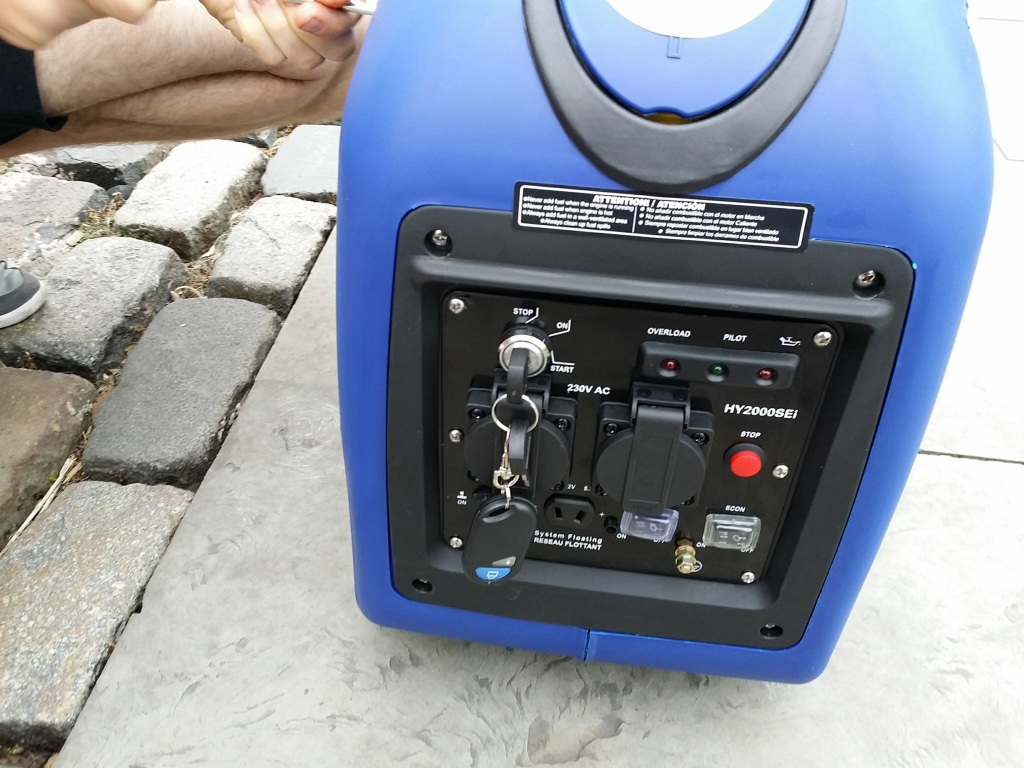 We then filled up with petrol and plugged in the washing machine. We only have a little 3kg Zanussi but it is rated at 1900w which is quite close to the rated load of the generator (being a maximum of 2200w)...

....we switched the generator on and then started it by remote control (feels really clever to start it with remote!) and held our breath as the washing machine started to fill with water...

The first wash load was on! No problems with heating the water up or spinning or anything. It was fantastic.

What's even better is that it is really quiet! It revs a bit when the washing machine is heating water - but that's because it's using maximum wattage, I guess. But if we have the shoreline cable plugged into it for battery charging and have the generator on 'econo mode' it's so quiet both inside and out.

Actually, I didn't notice when I was inside that it had switched off at one point - it had run out of petrol! We can also switch it off using the remote control inside - anything for an easier life!

It's definitely a solid, well built piece of equipment which I hope will help us out for a few years.

Shortly after getting all that going, my second delivery of the day arrived - the replacement carpet. That's where it all well and truly kicked off but I won't bore you with that today... Instead, I'll dedicate a whole post tomorrow to bitch about how stupid some people in this world are! You know you can't wait!
hyundai Hyundai generator narrowboat power generation pure sine wave TNT washing machine