Hello. We're new around here despite meaning to start a blog when we first bought our boat around 18months ago ! Originally, I wanted to create a blog as a diary of us doing a self fit out of our boat back in June /July last year. However, most of the work is done now and we've done LOADS!!

Basically, around May or June time of 2011 we woke up with an idea to buy a boat! Neither of us had even been on a narrowboat before never mind made a home on one! To this day, I still can't remember exactly where the idea had come from or what on earth made us act on it, but I'm glad we did.

We (stupidly) bought the first boat we went to look at there and then too. We didn't have a survey and it had nothing inside, just sprayfoamed and partial lining inside, we were more than confident back then that we'd be able to fit it out ourselves on a ridiculously low budget. We soon learned! Having said that though, we did fit it out to a reasonable standard although we're never satisfied with anything and are always looking to improve things. Which is why, finally, I've started this blog now.

We're currently in a really nice hotel as we are awaiting for the first "professional" carpentry work to be completed on our boat. We are having some new front doors fitted, partially glazed and made from mahogany as the ones that came with the boat were just steel and a bit shabby on the inside. They'll look like these ones when fitted: 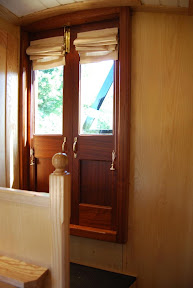 We will have some leading on the glass as well though just to jazz them up a bit.

Currently next to the doors we have a full length, double door cupboard/wardrobe for coats and shoes etc. However, we had that built when we first got the boat by a really dodgy joiner who ended up doing a lot of our cupboards etc in just plywood and they are absolutely dreadful. This is the reason we have now taken the boat to a professional boat fitters, just to have some finishing touches put in the boat in the form of some good joinery. So the full length cupboard will be replaced with something similar to this: 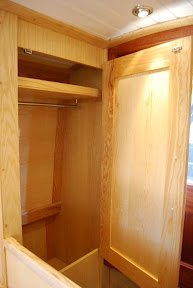 Attached to this cupboard, we will have an angled cupboard which will be contoured and fitted into the cabin walls, it will look amazing. Again it will look similar to this one :

The difference between this and ours is we will have the cupboard on the bottom but the top half isn't going to have a cupboard door on but will be open with glass shelving and a light inside for some glassware. I'm really excited about this cupboard the most.

Finally, nice carpentry done by the professionals! They're also finishing off a step for us and a piece of panelling over the water tank (internal bulkhead side)

We're heading back to the boat tomorrow to look at progress but they're a bit behind schedule, so tonight we will make the most of the hotel as it will be chaos when we return to the boat and have already been told that the mahogany doors may still not be fitted and we will just have a sheet of ply to cover the door opening!

Still, we have no choice now, as we are running outdoor funds to stay in hotels.... Oh , and we have to pick up Edward, our Border Terrier tomorrow afternoon from friends!