- November 27, 2012
The dog, Eddie keeps 'doing a runner'! It happened a couple of days ago when we'd let him off the boat and a few minutes later he'd completely disappeared.

It turned out he'd followed a jogger into the local village (around half an hour of a walk away for me) and a couple who had recognised him as being from our boat returned him to us.

It happened again tonight as I was washing the dishes. I'd had the door open as with cooking and the stove on, it had gotten too hot. Whilst I was busy with the dishes he'd snuck out and again I couldn't find him. It took me half an hour to locate him sniffing around the bushes quite a way down the towpath from here.

I'm really not sure why this is happening as Eddie normally stays within distance of the boat, only getting slightly excited if someone walks past. He'll follow them a few paces but then return to the boat. The sad thing is, I don't feel I can trust him any more as he used to sit outside the boat for hours on end, especially in summer, and never stray but I now think those days are over for him as I can't have him outside unless I've got a close eye on him.

We have another animal problem too lately! There's a squirrel who is ransacking the bird feeder and caused quite a bit of damage to one of the fat cages. Here it is in action: 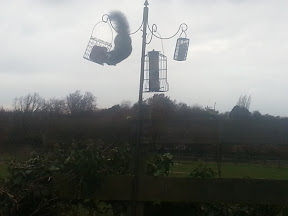 Hmmm. As cute as it was to be able to watch this out of the porthole, its now becoming annoying as he's quite destructive!!


I took Eddie for a walk this afternoon and we enjoyed a sunset scene...shame he's had to ruin tonight by doing a runner again! 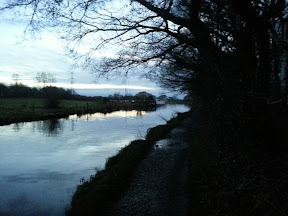 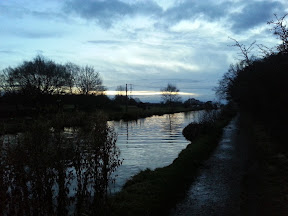 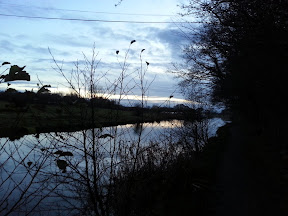 Not much else to report. Tomorrow I'm off work, so plan on making some ice cream (not the weather for it i know but i want to try a coffee/vanilla idea I've had in mind since the summer) and "finishing" the wine that we make.

By Christmas we should have 18 bottles of wine! that should be around 12 of an elderberry red and 6 of an elderflower white. Mmmmm!

Its quite late and getting quite cold, so I'm heading off to load the stove up with coal and get ready for bed.

Remember, life is...One Thing After Another!