- November 13, 2012
Sorry for not posting for a while! Everything was a bit manic in the last few days at the boat builders and then we had to focus on getting the boat back to the mooring and getting back to work etc. Thats why I've not had chance to post updates.

We are finally getting back to some normality and its strange having all this cupboard space.... I'm struggling to find things to put in them!

Well here's a few more pictures of what the place is looking like now. We're still awaiting for the toughened glass shelves for the glass cabinet....but they should be here by the end of the week. 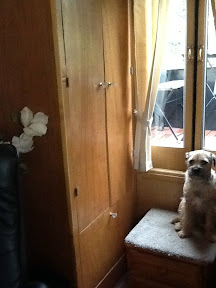 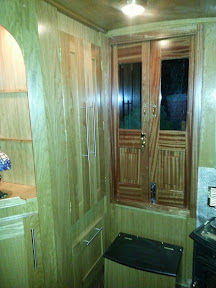 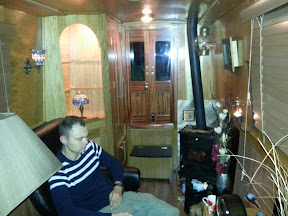 We are definately impressed with the work, it feels like a totally different boat and definately adds a bit of class to the place ;)

As nice as the guys were at Bourne Boats though, it was great to finally leave the place and get back to a normal lifestyle rather than living in a build project! However, they are definately incredibly talented and I'd recommend anyone who is looking for a boat build or some upgrade work to go to the,.

I finally left the boat yard on Wednesday afternoon last week at around 3PM. I was cruising alone as Pav was at work and it was the first time I'd cruised alone so obviously a bit nervous. But it was fine and I actually quite enjoyed it. I had Eddie on the roof with me and it was nice just to take in the autumn scenery. I finally got back to the mooring point around 5ish and Pav was there to help me moor up.

We've got another problem now with the batteries though! Most nights they would drop around 5 or 6 % an hour with the TV, fridge , Internet dongle and aerial on and the odd light or two... However, since being back from the boat yard they are going down about 10% an hour and we cant work out why. We know they needed topping up with water and we did that on Friday!

Whilst doing that though, we pulled a wire out of the Smart Gauge battery monitor and Pav attempted to insert it back in, and upon doing so, let the positive and negative wires of the connections touch! anyway, we were then getting an error code and the unit wasnt functioning properly so we had to return it to Merlin, who are the suppliers/manufacturers! It's so frustrating, as now, we have no proper way of seeing how charged up our batteries are for our electricity! We can get a rough idea from looking at the controller for our solar panels but its not exact!

Also, we cant really tell if topping up has improved how the batteries are performing, so its a bit frustrating at the moment!
We are due to receive the battery monitor back on Thursday, so we'll know more then! In the meantime, we've just got the engine on for most of the time to make the batteries don't drop below 50% and therefore get damaged!

It really is, one thing after another on this boat!

Posted using BlogPress from my iPad